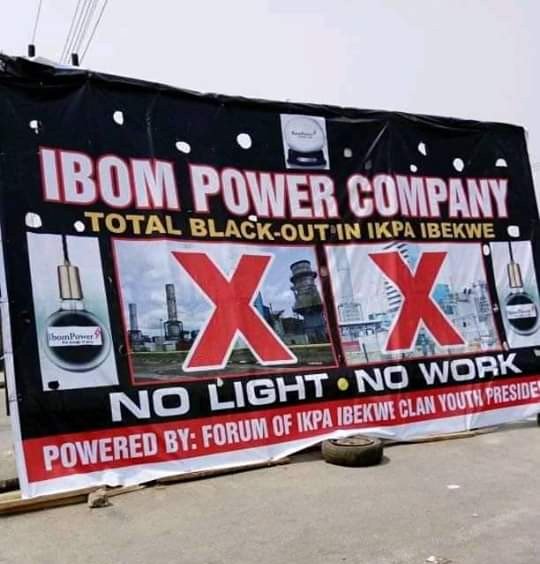 Port Harcourt — The protest against Ibom Power Company Limited, IPC, by the youths of Ikpa-Ibekwe town in Ikot Abasi Local Government Area of Akwa Ibom State, has been called off, 25 days after.

Recall that youths of Ikpa-Ibekwe communities on 13th January 2020, laid siege on the entrance of IPC in protests against lack of electricity supply in the area for the past three years, despite playing host to the 191MW capacity electricity generation plant since 2001.

The protest which spread on the social media with the hashtag, #LightupIkpaIbekweProtest, had turned into a carnival as schools, markets and businesses in the area, were shutdown to enable every resident of the town to join in the protest.

Confirming the resolution of the protest and the packing out of of protesters from IPC premises, the President of Ikpa-Ibekwe Youth Association, Benjamin Friday, said normalcy has now returned to the town and IPC is expected to resume operations in the plant any moment from now.

Friday disclosed that parts of the resolutions is that PHED should reconnect the entire LGA to the national grid, while IPC would supply power which PHED would distribute to Ikot Abasi, since IPC do not have the license to distribute power.

The Youth leader said the power which would be supplied to Ikot Abasi by PHEDC would be free of charge, as it would be a corporate social responsibility from IPC.

He also disclosed that the communities have packed out from the entrance of IPC, and that parts of the resolution is a monthly meeting between the management of IPC and leaders of the host communities.

A copy of the resolutions obtained by our correspondent, which was signed by the Board Chairman of IPC, Engr Etido Inyang, and the President of Ikpa-Ibekwe Youth Association, Benjamin Friday, in the presence of the Commissioner of Police in the state, affirmed that the LGA would be reconnected to the national grid by PHEDC.

The resolutions read in parts, “IPC agreed to appoint indigene of Ikpa-Ibekwe who has already gone through qualifying interview as management staff in IPC.

“IPC agreed to continue with the skills acquisition training that had already been discussed with t Ikpa-Ibekwe youths.

“IPC shall review issues connected with CSR, particularly as it relates to health hazard complaints by the community.

“PHEDC power supply should be reconnected to supply power to Ikpa Ibekwe and that no demand should be made to the community for payments in the interim.

“Akwa Ibom State government has approved with cash backed-up, the construction of a Power Substation in Ikpa Ibekwe that will step-down power from IPC for PHEDC to supply to Ikot Abasi communities.”