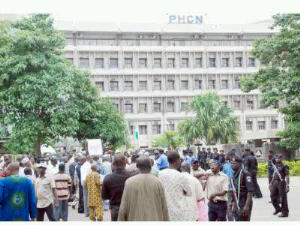 04 February 2013, Sweetcrude, Lagos – Indications are that a fresh crisis is brewing between organized labour and the Federal Government over the planned privatization of the assets of the Power Holding Company of Nigeria, PHCN.

Already, both parties are singing discordant tunes that have begun to heat up the system and threatened industrial peace in the Power sector that appeared to have been restored after the Federal Government and labour reached agreement late last year on the contentious terminal benefits for workers ahead of the privatization of PHCN’s assets.

Though few days after the agreement was reached, some officials of the Ministry of Power stirred up the hornet nest with comments about available funds for payment of gratuity to workers, when accruing amount to the workers has not been calculated, the workers, under the umbrella of the National Union of Electricity Employees, NUEE, kicked against it and it was rested.

But mid January, officials of government triggered off another controversy, when they announced Government plans to hand over PHCN to core investors within two weeks in completion of the Privatization process.

Few days after the announcement, investors were seen in some of the power plants with armed soldiers obviously to inspect the facilities in what was interpreted as preparatory for takeover.

Piqued by this development, labour has taken it as not only an assault, but attempts to clandestinely hand over PHCN facilities to private individuals without first settling workers’ entitlements.

Not taking it lightly, labour has threatened to shut down the sector over the alleged plots by government officials to subvert agreement reached with it on terminal benefits for workers ahead of the privatization of the sector.

It advised all investors scrambling to take over the assets of PHCN to steer clear of PHCN’s installations pending the implementation of agreed labour issues to avoid confrontation with workers.

Under the aegis of NUEE, labour condemned statements credited to some very senior Government officials of the intentions government to hand over PHCN within two weeks to core investors in completion of the Privatization process.

In a statement through its General Secretary, Joe Ajaero, NUEE, warned that any attempt by government officials to subvert the agreement reached between labour and government would be resisted, saying Nigerians should hold Government officials responsible for any breakdown of industrial peace in the sector resulting from their high-handedness..

According to the statement; “Recent media reports are awash of statements from very senior Government officials stating the intentions of handing over PHCN within two weeks to core investors in completion of the Privatization process.

The workers irked by this statement credited to the Secretary to Government of the Federation – Chief Anyim Pius Anyim hereby advise all investors not to dare into any PHCN installation(s) in the bid to take over the facilities when the labour issues as agreed have not been implemented. After the Agreements were reached by all the Parties involved; there seem not to be genuine efforts by the Government to implement the issues.”

“One wonders why the rush to handover, by force when core labour issues that stalled the process in the first instance, have not been implemented? It will be daring for any investor to tinker the idea of moving into any PHCN facilities to carry out any form of activity as we can neither guarantee industrial peace nor their intent in such work environment, when the agreement which enjoyed joint authorship with the Secretary to Government of the Federation has not been implemented.

We believe the Government should be bold enough to ensure full implementation of the Agreements before handing over to the core investors. For the avoidance of doubt, the so- called investors are not our employers as at today and should not be seen to be responsible for our past services to the organization.”