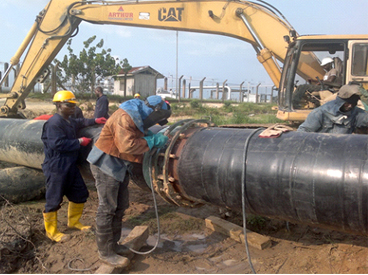 14 January 2018, Sweetcrude, Abuja — The Nigerian National Petroleum Corporation, NNPC, Friday, said power supply would not be affected by the shutdown of the Escravos to Lagos Pipeline, as arrangements had already been put in place for alternative sources of gas supply to the affected power plants affected by the closure of the critical gas infrastructure.

In a statement in Abuja, Group General Manager, Group Public Affairs Division of the NNPC, Mr. Ndu Ughamadu, said the corporation’s Group Managing Director, Mr. Maikanti Baru, had directed that an alternative pipeline be re-streamed immediately to ensure gas supply to power plants in parts of the country is not disrupted.

Ughamadu explained that routine gas supply for power generation was not affected by the fresh fire incident which engulfed a segment of the pipeline.

He said, “Already, gas supply into the network via alternative sources has been ramped up ahead of ongoing repair works on the affected segment as directed by Baru.

“The strategic Escravos to Lagos Pipeline System was affected by a fire at a segment along Egbokodo-Omadino, in Warri South Local Government Area of Delta State in the early hours of Thursday.

“Apart from being the main source of gas supply to some crucial power plants, ELPS feeds the West Africa Gas Pipeline System.”