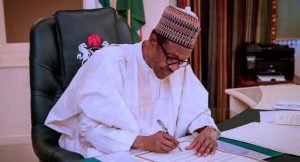 11 April 2018, Sweetcrude, Lagos – Stocks dropped at the Nigerian Stock Exchange in Lagos on Tuesday after President Muhammadu Buhari announced his intention to contest for a second term in the 2019 elections.

According to statistics released by Reuters on Tuesday, stocks dropped, hitting a three-month low.

Sentiment remained subdued as stocks hovered around the flatline. The country’s stocks have been on a downwards trajectory for over a month.

President Buhari made his intention public on Monday.

While supporters of the president have clamoured for a second term in office, a fraction clamoured for him to step down on the basis of his low performance and ill-health, for which he sought treatment in London for several months last year.

The president, 75, is yet to come clean on his health issues to the country of over 180 million population.

Others say Buhari’s intention to re-contest is uncalled for due to the country’s current economic and security challenges since his election in 2015.

Despite the recent announcement that the country had exited recession, economic growth remains slow.

The International Monetary Fund, IMF, forecast that Nigeria’s economy will grow at 1.9 percent in 2018, well below the emerging market average of 4.9 percent.

In spite of the negative turn of events, Nigeria’s state revenue for February increased by N19 billion following a boost in oil prices and increase in crude oil exports.

Oil prices rose to $71pb in January, staying around $60pd for some time, and now around $70pb as at the time of filing this report.

Currently, President Buhari is not in the country, as on Monday, the presidential Twitter handle tweeted of his departure for an official visit to Britain, where he will hold discussions on Nigeria-British relations with Prime Minister Theresa May, ahead of the Commonwealth Heads of Government Meetings, CHOGM, from 18th to 20th April.