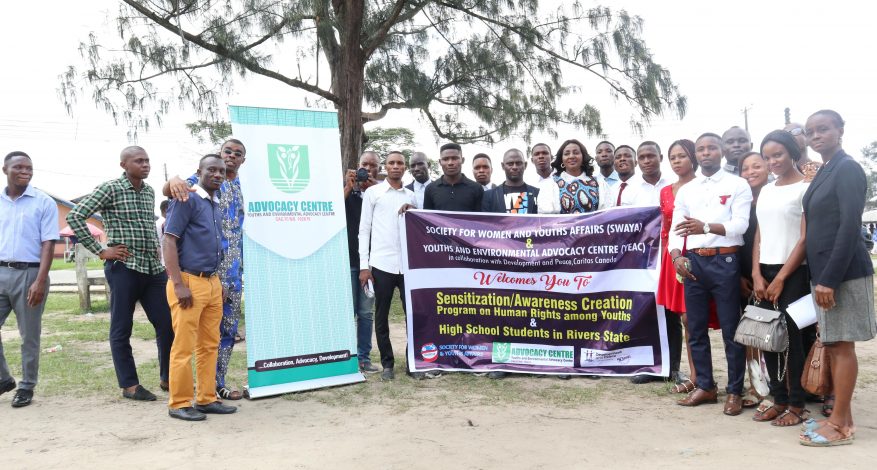 Port Harcourt — A nongovernmental group known as Youths and Environmental Advocacy Centre, YEAC, has called for the provision of alternative means of livelihoods, for Niger Delta youths involved in the act of oil theft and illegal refining of petroleum products.

Executive Director of YEAC, Fyneface Dumnamene Fyneface, made the call in Port Harcourt at the regional flag-off of the campaign for the mobilization and sensitization of one million youth volunteers as human right defenders and promoters in the Niger Delta.

Fyneface said no matter how the region is militarized, if there is no alternative means of livelihoods for the youths, activities of oil theft and illegal bunkering of products will not end in the region.

He the one million youths would work with Advocacy Centre as environmental justice activists, climate change campaigners, community development, peace advocates as well as reporters of health issues and corrupt practices that contribute to underdevelopment in the region.

“Since 2017 we have been going round the region engaging young people on human rights and how to address the issue of environmental pollution in the region.

“We brought youths involved in crude oil theft and artisanal refining to a platform called Niger Delta Ex-artisanal Refiners Forum to key into the promise of the Federal Government for the establishment of modular refineries, so we can have them to be able to operate these modular refineries in order for them not to pollute the environment in the process of making a living.

“So we are calling for the provision of alternative means of livelihoods for youths involved in the act of oil theft and artisanal refining, because it is only when you give them something else that they can remove their hands from what they are doing and pick a new hustle.

“Unless this is done, no complaints will do so. No matter how they militarised the Niger Delta region to stop oil theft, it won’t stop. So there is need to give them (oil thieves) something else to do.”

The environmental justice campaigner also said YEAC was currently working against over relianc on hydrocarbon, and the need for the country to embrace renewable energy.

He stated that other NGOs have not done much in dissuading oil thieves and oil multinationals from continuous polluting of the environment.

“Nobody has thought of it that an NGO will be able to mobilize 1million people on human rights. The NGO is focusing more on youths and environmental issues and we know that since 1950s when oil exploration started in the Niger Delta, the rights of the Niger Delta people have been violated, while a lot of people use this avenue to campaign and make money out of the process instead of addressing the core issue.

“This is why YEAC is focusing more on communities on livelihoods and empowerment issues to see how we can change the narrative.

“We believe if we can campaign and stop pollution, other sources of livelihoods will automatically spring up because what people now catch in our rivers is oil instead of fishes.

“The existing NGOs have not done much in talking to our youths involved in crude oil theft and illegal refining, or the multinational oil companies that polluted our environment to see how they can bring in international best practices to drive the process of ensuring that the environment is safe.