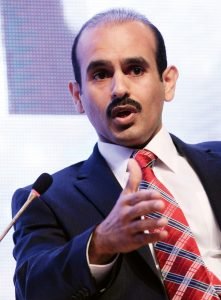 Doha — Qatar, the world’s largest supplier of liquefied natural gas, said on Monday it can’t help ease the red hot gas market because it has allocated all its output and believes the high prices are destructive for demand.

“We are maxed out as far as we have given all our customers their due quantities,” Qatar’s energy minister Saad al-Kaabi said.

He said he expected gas prices to “ease off slightly” as some plants come back up and with Russia’s pledge to increase supplies to Europe, but high prices were not good.

“I am unhappy about gas prices being high,” he said, adding that the U.S. market would “feel the pressure soon” and that customers are already feeling the effects by paying more for electricity.

“The lesson is more long-term deals. Even if I can benefit from short-term spikes like this, I don’t like it because it is destructive to demand, it hurts my customer and my customer needs to be healthy for me to be healthy,” he said.

Kaabi is also chief executive of the state energy company and was speaking after a press conference to announce that the company was changing its name from Qatar Petroleum to Qatar Energy to reflect a broader energy strategy.

Countries that have already secured long-term gas supply deals are reaping the benefits of more stable and “much more reasonable” prices in addition to long-term stability, he said.

Qatar Energy does have some volumes that are divertible from one market to another, he said. “With these volumes, it’s basically market forces that force them east or west. Okay, so we’re catering for some a little more than others depending on the market dynamics.”

In February, Kaabi told Reuters that Qatar’s state-owned oil firm would still chiefly use long-term price contracts as it expands its output.

Kaabi said Qatar Energy would not expedite the time line of the North Field expansion to meet high gas demand.