Resource control, restructuring should be treated as national emergency – Stakeholder 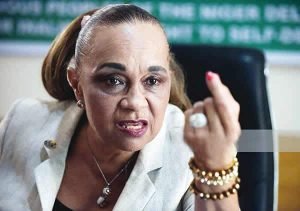 12 October 2018, Sweetcrude, Port Harcourt — A pan-Niger Delta activist, Ms. Ankio Briggs, says resource control and restructuring of the country’s current structure are the only panacea to genuine development in the oil-rich Niger Delta region, and the nation in general.

According to Ms. Brigg, the present structure of the the country constituted a bottleneck to the development of the Delta as it does not allow the region access to its natural resources.

Speaking at the Rivers State Government House as a member of the Ijaw Youth Council, IYC, delegates, Briggs  declared that the country had no option but to immediately restructure. She noted that restructuring simply meant resource ownership and control.

She regretted that the 2014 National Conference report was dumped because of its far-reaching recommendations towards addressing some of the challenges facing the Niger Delta and the minority question.

According to her, “Restructuring simply means resource ownership and control.

“The Niger Delta region, as the proverbial goose that lays the golden egg, has over the years fuelled the Nigerian economy through the exploitation of its resources, but there is nothing to show for the development of the region.”

Briggs called on stakeholders in the Niger Delta to see the clamour for restructuring as a clarion call, saying that those opposed to the restructuring of the country were the enemies of the region, who want the people to live in perpetual poverty.

She warned that the Ijaw people will resist any attempt to scuttle the call for restructuring of the country, which she described as the hope of Nigeria’s future.

“The issue of restructuring should be treated as a national emergency. Nigeria must respond to the imperative of justice for it to stand as a nation,” she said.