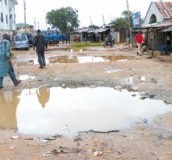 16 April 2012, Sweetcrude, PORT HARCOURT — THE people of Ogbogu, Egita, Obiyebe and Obite in Ogba/Ndoni/Egbema Local Government Area of Rivers State, have raised alarm over the impact of a gas leak from a Total E&P Nigeria Limited, TEPNG, facility on their communities.

Total, meanwhile, said it had shut production at its Obite gas plant due to a technical fault on its facility in the area that resulted in a gas eruption.

President General, Egi Peoples Assembly, EPA, Chief Oris Onyiri, who raised alarm over the impact of the gas eruption on their communities, said: “Ogbogu, Egita, Obiyebe and Obite communities were seriously affected by the eruption.

“The gas eruption has devastated farmlands, forests, wetlands and other vital economic and environmental resources of the communities in the area. There is palpable fear of contamination of the air and underground water in the affected area.

“This has thrown the entire Egi communities into trauma, fear and anxiety. There is also a threat to the biodiversity of the area on which the livelihood of the communities depends.”

TEPNG, in a statement, weekend, meanwhile, said a special task force had been constituted and would work with well control experts to find technical solution to the problem created by the gas resurge on the facility.

The company claimed that there had been no injury as a result of the incident.