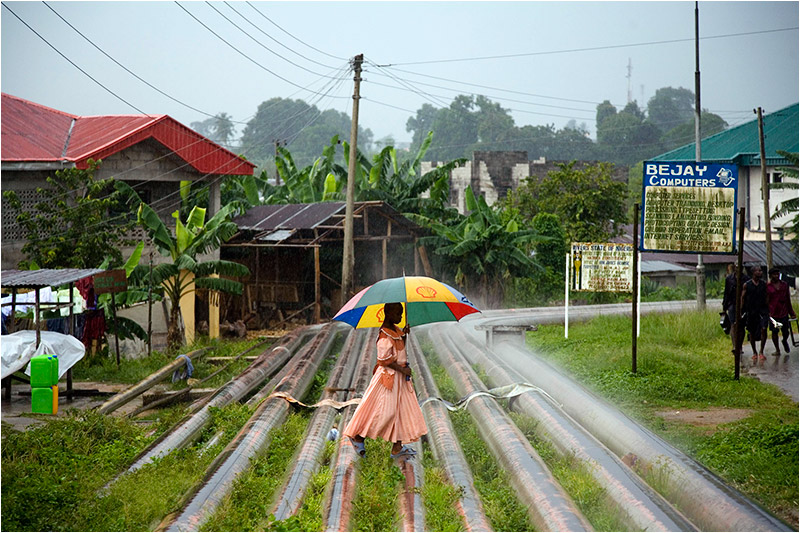 *Oil pipelines create a pathway for this young woman through a section of Okrika Town.

19 December 2017, Sweetcrude, Port Harcourt — Worried by the increased number of patients with terminal diseases in the area, Okrika communities that co-host the Port Harcourt Refining Company, PHRC, have appealed to the management of the refinery to fund the treatment of cancer, kidney failure, amongst other terminal diseases prevalent in the area.

The communities made the appeal in Ibuluya, Okrika Local Government Area of Rivers State, during the flag off of a free medical outreach for the people of the area by the management of the Port Harcourt Refining Company.

Chairman of Joint Community Relations Committee of PHRC in Okrika, Chief Martins Kunimgbe, who spoke on behalf of the communities, said the health outreach organised by the company was in the right direction.

Kunimgbe appealed to the management of PHRC to also make provisions to fund the treatment of terminal diseases in the area, which he said was very expensive and unaffordable by the people.

“We thank PHRC for the understanding you have of the Cooperate Social Responsibility. Since you are a Federal Government agency, we plead that you help to finance the treatment of terminal sicknesses.

“Our people do not have the money to treat cancers, kidney problems and other major surgeries and terminal cases.

“Such therapy is expensive for us, so since you are here for medical outreach put that into consideration.

“It is not good that our people who have such problem will go to the television to beg, these sicknesses are not common, but few of the cases need money to fly them outside for treatment, ” the communities said,” he said.

Earlier, the Managing Director of PHRC, Mr. Shehu Malami, stated the refinery’s commitment to meaningful development, and programmes for its host communities.

Malami, represented by the Manager, Health and Safety, Mr. Ifeanyi Nwabueze, explained that the medical outreach would serve as part of its end of year felicitations to the host community, as well as a step towards beginning the new year with better health for members of its host communities.

“This Medical outreach is a testament to the commitment of PHRC as a company that is determined to foster mutual and symbiotic relations between us and the host communities.

“PHRC has not wavered in our commitment to corporate social responsibility to the community,” he said.