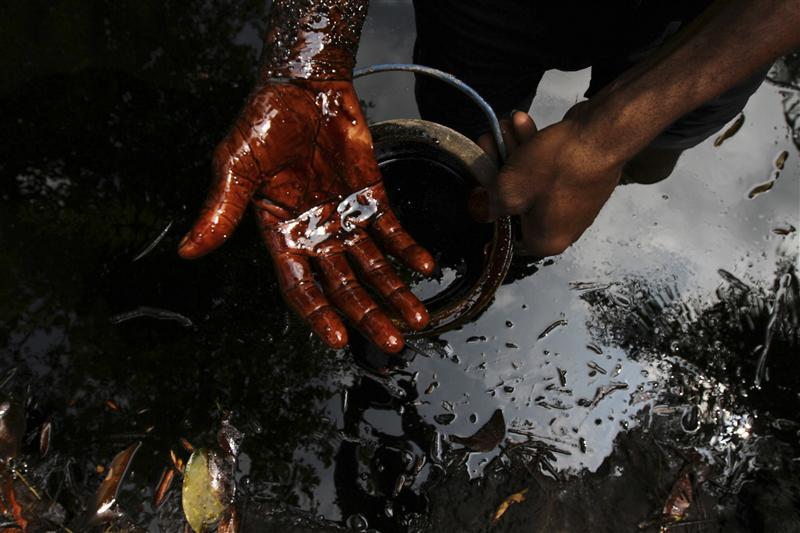 *A man samples crude oil at the bank of a polluted river in Bidere community in Ogoniland in Niger Delta region. REUTERS/Akintunde Akinleye.

Rivers State Commissioner of Environment, Professor Roselyn Koinya, made the call at a sensitization campaign against illegal refineries and crude oil theft, organised by the National Oil Spill Detection and Response Agency, NOSDRA, in Akpajo community, Eleme Local Government Area of the state.

Prof. Koinya also explained that the state government has taken steps towards engaging youths through skills acquisition and job creation campaign, through the Rivjobs platform, saying the Rivers State Government was linking up employees to employers in the state through the rivjobs website.

She encouraged youths in the state to key into the state government’s skills acquisition program, which she said starter packs would be given at the end of the training, for gainful activities.

Represented by a Director in the Ministry, Charles George, Konya said the aim of the campaign was to create awareness on the dangers of pipeline vandalism and illegal refineries.

“You must maintain peace in your communities and also exercise patience, once the cleanup comes on stage, a lot of jobs will be created,” the commissioner said.

Also speaking, the Director General of NOSDRA, Dr. Peter Idabor, warned against encroachment on pipeline rights of way to avoid an explosion.

Idabor represented by the Director, Safety and Litigation Department of the agency, Mr. Melus Odobo, said people should not build or farm on pipeline rights of way, to avoid explosions.

For his part, the Community Development Committee Chairman of Akpajo, Mr. Oliver Nwidaa, appealed to the federal government to create job opportunities for the youths in order to discourage youths from going into crimes such as oil theft.