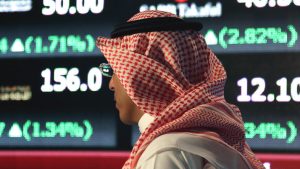 01 October 2018, News Wires — Saudi shares rose 1.3 percent on Sunday to their highest close in more than a month, fueled by an oil price rally and the kingdom’s plans to boost state spending.

In the third quarter, Brent has gained about 4 percent.

“The market was attractive at lower levels with forward PE around 14 times, oil is above $80 now and news on the economy is positive with the government saying they are looking at increasing spending over the next few years,” said Muhammad Faisal Potrik, head of research at Riyad Capital.

Saudi Arabia’s government aims to increase spending by over 7 percent next year in an effort to boost sluggish economic growth, while continuing to cut its budget deficit gradually, finance ministry figures released on Sunday showed.

A gain of more than 2.2 percent in Industries Qatar lifted Qatari stocks by 0.3 percent.

Kuwait and Russian stocks have also shown sharp gains in the last quarter. The Kuwait index, was flat on Sunday, is up nearly 9 percent this quarter.

The Dubai index gained 0.3 percent, helped by a 2.6 percent rise in contractor Arabtec which has been riding high since announcing a 3.2 billion dirham ($871 million) contract earlier this month, won by a consortium involving one of its units.

Property firm DAMAC also climbed 2.5 percent ahead of a property show this week where it is expected to showcase new offerings.

Abu Dhabi’s index was down 0.3 percent due to weakness in First Abu Dhabi Bank, but Bank of Sharjah closed 1.9 percent higher on merger talk.

Reuters, citing sources aware of matter, reported last week the Sharjah government is considering a possible merger between Bank of Sharjah, Invest Bank and United Arab Bank that could create a lender with about 66.2 billion dirhams ($18 billion) of assets.

Reem Investments, which listed on Sunday on the secondary market, closed at 14 dirhams($3.81) after hitting a high of 16 dirhams in early trade.