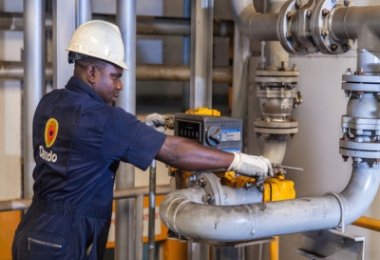 *Oando personnel working the controls at a gas facility.

11 April 2018, Sweetcrude, Lagos — In a bizarre turn of events today, the Nigeria Stock Exchange, NSE, after serving notice yesterday that it had lifted the technical suspension placed on trading in the shares of Oando Plc following a directive of the Securities and Exchange Commission, SEC, turned around to re-impose the suspension barely 24 hours after.

SweetcrudeReports gathered that in the late hours of Tuesday, 10th April 2018, the Nigerian Stock Exchange notified Oando by a letter signed by the Executive Director in charge of Regulation, Tinuade T. Awe of its decision to lift the technical suspension imposed on the trading of the company’s shares; following a directive by the Securities & Exchange Commission (SEC).

However, no additional reasons were provided for this unprecedented turnaround.

On Wednesday, the 11th of April after Oando shares began trading again; the share price rose by 5.8%, trading at N6.80 in less than 3 hours.

To the dismay of a shocked market, now thrown into turmoil; the SEC has decided to re-impose the suspension on trading of Oando shares for no apparent reason, or justification.

Industry observers have branded the SEC and the NSE action as erratic and unprofessional, noting that the action ridicules Nigeria before the global financial community.

Another financial analyst noted that the action reflects poorly on the people who are supposed to objectively regulate the Nigerian markets.