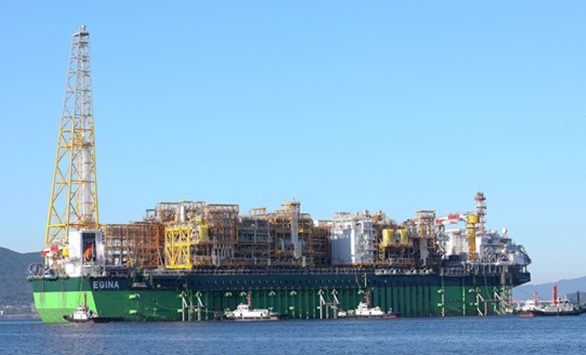 The Chairman of the committee, Solomon Adeola Olamikan made the commendation when he led his team on inspection of the facility at the Ladol fabrication yard in Lagos on Friday.

In his speech, Olamilekan acknowledged the multi-billion-dollar investment vessel, adding that project of such magnitude will further boost the relationship between Nigeria, TUPNI and other partners, assuring all of the viability of such project to the country’s economy.

“This project is a huge investment coming into Nigeria at this time. And we are proud that the vessel will remain with them over the next twenty-five years.”

“We decided to come see it with our own eyes since its arrival into the country few weeks ago, and we can see that it has come to stay”.

“We commend Total for investing such a huge amount of money into Nigeria and we believe the partnership with Nigeria will work,” he said.

The senator added that the committee would do its part by “watching” and ensuring that the Joint Venture between the company and the Nigerian National Petroleum Corporation, NNPC produces a great dividend for Nigeria.

The Egina FFSO’s team was assembled in 2012, while the project fabrication commenced in 2014.

Egina FSPO is the largest investment project currently on-going in the oil and gas sector in Nigeria.

The project is expected to be completed in fourth quarter of the year within the initial budget of $16 billion.

The Egina FPSO is the largest FPSO ever installed in Nigeria (330-metres long).

It is currently berthed at the newly built 500-metre FPSO integration quayside at the SHI-MCI Yard, Ladol Island, Lagos where the integration of six locally fabricated modules will take place over the next few months.

This is a first for Nigeria and in fact for Africa.

Terraz said the company and its team were “proud” of the project as it is a “step forward” in its achievements in the oil and gas sector.

According to him, it took a combination of “hard work, determination, and finance” to bring the project to be.

He added that the integration of the 6 locally fabricated topside modules at the SHI-MCI FZE quayside (Samsung Yard) before its final sail-away to the Egina field is a game changer as far as the execution of deep offshore oil & gas projects in the country is concerned. It is also a remarkable achievement in local content development in Nigeria.

“Being the first project to be launched after the enactment of the Nigerian Oil & Gas Industry Content Development Act in 2010, EGINA is advancing Nigerian Content to record levels and has by far the highest quantum of local content completed for any oil & gas project in Nigeria, but also for Total’s projects worldwide”.

In a statement, Frank Ejizu, the chief operating officer of Samsung Heavy Industries (SHI-MCI), said the investment Samsung made in the facilities is a big boost for the local content development in the country.

According to him, the government should be more proactive so that before long it is not only bits and pieces of the component that would fabricate in the country but a whole FPSO.

He said however as a nation, Nigeria must start from somewhere.

“What is happing in respect of Egina is a foundation. But we must have the basics and this is like building the enabling infrastructure for technology to be transferred”.

According to him for the technology to be transferred Nigerians must be actively engaged in big projects just like Egina. Egina project he said trained Nigerians abroad and they got on hands experience on the job and the product of this is six modules that are being fixed to FPSO and the SHI-MCI fabrication yard at the Lagos DeepWater- and Offshore Logistics (LADOL). Nigerians he said were actively involved in the building of these modules.

Most of the Nigerians he said are trained in various segments of engineering and they can go any wherein the world and they would perform well.

Samsung is ranked 7th on best global brands and is the world leading company in electronics, shipbuilding, and machinery, services, chemicals, and finance, through the various subsidiaries.
Reputed as the engine of the Korean economy, Samsung has a global network of 33 affiliated companies, 559 offices, and facilities in 74 countries.

Egina is the deepest offshore development carried out so far in Nigeria, with water depths over 1,500 meters.

The Egina FPSO has been designed for 25 years of operations and in addition to producing 200,000 barrels of oil per day at peak output.

Its operations will generate significant activities for local contractors in various sectors and continue to provide avenues for the training and development of Nigerians in various domains.

The Egina field was discovered by TUPNI in 2003 within the Oil Mining License 130 (OML130), some 200 kilometres south of Port Harcourt, Nigeria. The field is being developed by TUPNI in partnership with NNPC, CNOOC, SAPETRO, and PETROBRAS.