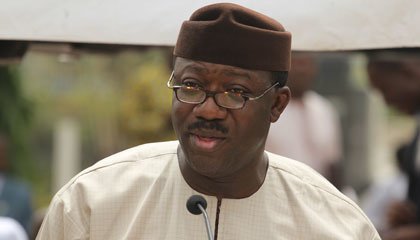 18 October 2017, Sweetcrude, Abuja – The Senate on Tuesday summoned the Minister of Solid Minerals Development, Dr. Kayode Fayemi, to appear before it over the neglect of communities and victims affected by lead poisoning in Zamfara State.

The motion sponsored by Sen. Oluremi Tinubu seeks the Minister’s brief on a framework to ensure the protection of residents of mining communities.

In 2014, 38 villages in Zamfara State were reported to have been impacted by the effect of artisanal and unwholesome mining.

This resulted in blindness, infertility and neurological defects for over 400 children and many others.

In reaction, the Federal Government in 2016 approved and released intervention funds for urgent remediation of affected areas.

Presenting the motion, Mrs. Tinubu said that only eight out of the 38 affected communities had any remediation.

“Too many Nigerians are suffering, unable to access effective medical treatment for the resulting ailments, losing loved ones and suffering deformities of varying degrees,” she said

She noted that due to the paucity of funds, Medecins sans Frontieres (MSF), TerraGraphics International Foundation, and other civil society organisations have pulled out of the area, hence, the need to summon the Minister for a situation report.

The Deputy Senate President, Ike Ekweremadu, who presided over the plenary said the motion was important as the Senators bears the responsibility to protect Nigerians.

“We are aware that a lot of illegal mining is going on in many areas. It is our responsibility that people in this areas are protected,” he submitted.

The senators after deliberations resolved to invite the Minister to appear before the plenary to deliver a brief on its mining roadmap, implementation framework and how it intends to ensure the protection of residents of mining host communities.

No date was set for the appearance.

The lawmakers also mandated its committee on Environmental and Solid Minerals to visit affected communities to ascertain the level of damage and investigate activities of the Ministry of Environment as it affects the mining sector.

According to him, “It is a bit tricky to estimate how much was spent for treating the affected people because we also deal with other diseases apart from lead poisoning at the same time. I will say the cost implication for their treatments is worth millions of dollars; one drug administered per person costs about three dollars and a patient takes up to six drugs per day.”

He explained that the poison was due to environmental contamination from artisanal gold mining, adding that in 2010, eight villages were affected in Zamfara.

He noted that about 5,500 people, including old and young, were affected in the eight villages in Zamfara, adding that the NGO took measures to avoid more deaths.

Tirima noted that at the end of May, about 430 out of 5,500 affected victims in Zamfara remained in the treatment programme. “We treated both old and young ones; while the state government sponsored the remediation of all contaminated areas.”

In Niger State, he said two villages, including Unguwar Magiro and Unguwar Kawo in Rafi Local Government Area, were affected by contamination from artisanal gold mining in April 2016.

He said that MSF treated the lead poison victims and facilitated the remediation of the affected areas in collaboration with the Ministry of Environment to ensure children were no longer exposed to the contaminant.

He noted that children were most affected because of their sensitivity to lead poison, adding that the poison had the capacity to damage children’s memories and bodies in ways that would not be discovered easily.

He explained that the effects of lead poison could pose dangers on children in future, adding that they could have problems of kidney failure, aggressive nature, among others if MSF had not given adequate attention on time.