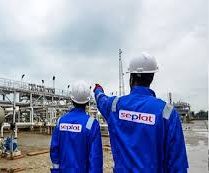 Ugborhen is one of Seplat’s foremost oil and gas host or producing communities in Ovhor field in OML 38 & 41, a swampy terrain in Okpe Kingdom in the Western Niger Delta of Nigeria.

The presentation of the three Toyota Hilux vehicles was done at the Ugborhen Community town hall and this is coming following the incident of insecurity in the area, which was highlighted in the community’s correspondence to Seplat whilst seeking support in addressing the situation.

The vehicles were procured from the community’s Freedom To Operate, FTO account.

Seplat said it carried out an assessment of the situation and the need and provided advise on how to address the situation, particularly, considering the peculiar location of the community situated on the fringe of Sapele Local government and ease of access by both land and water, which makes it vulnerable to insecurity.

The company also provided technical input (specifications) on the type of vehicle to be procured and guidance on how to structure the agreement with the security agencies – the Nigerian Navy, the Nigerian Police, and the NSCDC.

Although the vehicles were procured by the community, Seplat helped in inspecting and ensuring they are fit for the intended purpose.

The vehicles were presented to the Navy commander for the Nigerian Navy logistics base, Sapele; the Police Area Commander and the Commander of the Nigerian Security and Civil Defence Corps in Sapele Local Government by the President of the community, Engineer Phillip Mebradu.

Mr. Brown reiterated Seplat’s commitment to sustainable development in its host communities, saying the company will continue to promote security in its areas of operation and beyond, whilst urging the citizenry to continue to remain peaceful at all times.

At the event, various speakers commended the community and Seplat for the collaboration geared towards strengthening security in the area. The Police, the military and NSCDC officers expressed joy as they stressed that the support will assist in ensuring effective policing that will engender peace in the community and the Sapele Local Government Area at large.

Also, present for the handover ceremony were the representatives of the Orodje of Okpe, the Duke of Ugborhen District, the Sapele Local Government Council Chairman, the Senior Special Assistant to the Governor of Delta State on Community Development, the Sapele Police Divisional Head and the Military representatives, a representative of the member representing Sapele at the Delta State House Assembly, the immediate past president of Ugborhen Community, the council of elders, women folks, the youths, the media and the current interim Ugborhen CDC Committee executives led by Mr. Philip Mebradu and his team.