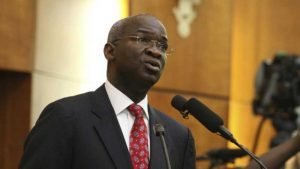 Oscarline Onwuemenhi
08 May 2018, Sweetcrude, Abuja – The civil society group, Socio-Economic Rights and Accountability Project (SERAP) has demanded an account of the spending by the Federal government from the Minister of Power, Works and Housing, Mr. Babatunde Fashola, following the privatisation of the power sector.

In a Freedom of Information (FoI) request to the Minister, the group asked him to use his good offices and leadership position “to urgently provide information on specific details of spending on the privatisation of the electricity sector and the exact amount of post-privatisation spending to date, and to explain if such spending came from budgetary allocations or other sources.”

The organisation is also seeking “information on the status of implementation of the 25-year National Energy Development Plan, and whether the Code of Ethics of the privatization process which bars staff of the Bureau of Public Enterprises (BPE) and members of the National Council on Privatization (NCP) from buying shares in companies being privatized were deliberately flouted.”

In the letter dated 7 May 2018 and signed by SERAP’s Executive Director, Mr. Adetokunbo Mumuni, the organisation said, “Since the privatisation of the power sector, the government has continued to use public resources to subsidise private entities.

“The Goodluck Jonathan government reportedly spent over N400 billion on the power sector while the present government spent over N500 billion on the sector despite privatisation. It is unclear if this spending is drawn from budgetary allocations and if these are loans to Generation companies (GENCOS), Distribution companies (DISCOS) and Transmission Company of Nigeria.”

The group said, “Assuming the funds are given as loans, SERAP would like to know whether appropriate guarantees have been provided to secure such loans, and whether such loans provide value for money for Nigerian tax-payers.

According to the organisation, “If the requested information is not provided to us within 14 days of the receipt and/or publication of this letter, the Registered Trustees of SERAP shall take all appropriate legal actions under the Freedom of Information Act to compel you to comply with our request.”

It expressed concern that “the privatization of the sector and unbundling of the Power Holding Company of Nigeria (PHCN) into different generation, distribution and transmission as well as post-privatization spending and the identities of those who bought GENCOS and DISCOS have remained shrouded in secrecy.”

“Most of the companies that won the bids had no prior experience in the power sector and little or no capacity at all to manage the sector. The privatization of PHCN would appear to have yielded the country total darkness. SERAP is concerned that gains of privatization have been lost through alleged corruption, manipulation of rules and disregard to extant laws and lack of transparency in the exercise.”

It added that, “The goals of privatization have been marred by the sale of the sector to preferred bidders that could not pay the bid value on the sale, instead the PBE encouraged the deferment of payment and restructuring of payment terms in contravention of bidding rules to the disadvantage of other bidders.

“Most of the acquiring companies only managed to put together acquisition finances without potent capacity to source or attract post-acquisition funding to upgrade the generation and distribution infrastructure.

“Government has had to further intervene by way of funds ejection, guarantees and assurances despite privatizing those assets. Nigerians are also entitled to the right to truth derived from the obligations of the government to carry out an investigation of allegations of corruption committed within its jurisdiction; to identify, prosecute and punish those responsible; and to ensure that victims have the simple and prompt recourse for protection against violation of fundamental rights, as well as to ensure transparency in public administration.

“SERAP believes that the right to truth allows Nigerians to gain access to information essential to the fight against corruption and in turn development of democratic institutions as well as provides a form of reparation to victims of grand corruption in the country. International human rights and anticorruption standards impose limits or conditions on the way a given process of privatisation is carried out.

“In fact, the UN Committee on Economic, Social and Cultural Rights in its General Comment 3 has implied that privatisation process should not be detrimental to the effective realization of all human rights.”

“By Section 1 (1) of the Freedom of Information (FOI) Act 2011, SERAP is entitled as of right to request for or gain access to information, including information on post-privatization spending by the Federal Government and accounts of spending by the private entities such as GENCOS and DISCOS. By Section 4 (a) of the FOI Act when a person makes a request for information from a public official, institution or agency, the public official, institution or urgency to whom the application is directed is under a binding legal obligation to provide the applicant with the information requested for, except as otherwise provided by the Act, within 7 days after the application is received.

“By Sections 2(3)(d)(V) & (4) of the FOI Act, there is a binding legal duty to ensure that documents containing information relating to the spending on privatization of the power sector and post privatization spending on GENCOS and DISCOS are widely disseminated and made readily available to members of the public through various means. The information being requested does not come within the purview of the types of information exempted from disclosure by the provisions of the FOI Act.

“The information requested for, apart from not being exempted from disclosure under the FOI Act, bothers on an issue of national interest, public concern, interest of human rights, social justice, good governance, transparency and accountability.”