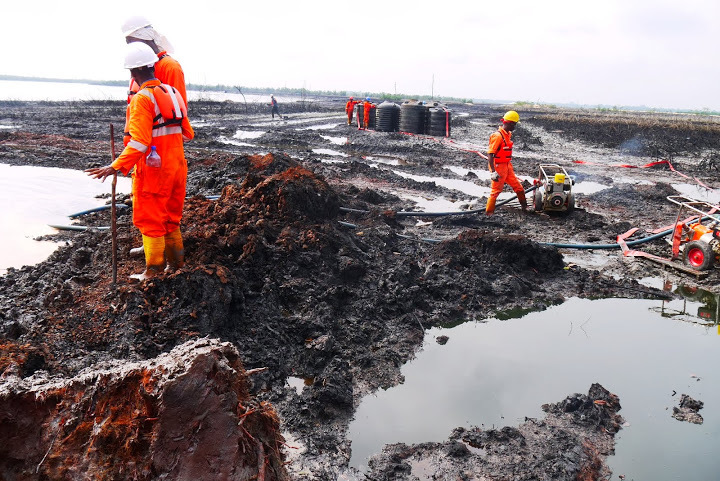 11 October 2017, Sweetcrude, Port Harcourt – The clean up of oil-polluted sites in Bodo community, Gokana Local Government Area of Rivers State, by the Shell Petroleum Development Company, SPDC, which began last month is now a source of happiness for Bodo indigenes.
Recall that in 2008 and 2009, a 55-year-old pipeline owned by SPDC ruptured twice, throwing up 600,000 barrels, according to Dutch court claims, of crude oil into the surrounding creeks in Ogoni. In 2015, after many years of court battles, Shell agreed to pay out $83.2million in compensation for the spill; Creeks and shores of Bodo, a once thriving fishing community remain decimated by the oil damage.
Manager, Global Memorandum of Understanding between Bodo community and Shell, Chief Sylvester Kogbara, in a chat with our correspondent, expressed happiness that Shell has finally began the clean up.
Kogbara at the same time expressed worries that the first phase of the clean up which is the removal of oil spills from the ground was supposed to last for up to one year but have been reduced to just three months.
He, however, expressed optimism that with the high powered monitoring team consisting of both local and international organisations,  the clean up will be a success.
According to him, “It is not a rumour, the clean up has began and it is on going, as to whether it is probably done or not, that we cannot immediately say right now, but we hope that as it progresses, we will be able to take record and see whether it is probably done or not, but I can tell you on good authority that it has started.
“Remember we took Shell to court and asked for community compensation and we got it, we asked for individual compensation we got it and, also that our environment be cleaned and restored back to normalcy, this delayed for sometime, but now that it has started we are happy.
“We have our own team of expert monitoring the clean up, there are also some international team, as well as government representatives and NGOs monitoring the clean up, such as NACGOND, NESREA and NOSDRA, so we cannot express our satisfaction or dissatisfaction for now until these people say otherwise.”
Kogbara, who is the immediate past Spokesperson of the Bodo Council of Chiefs, further said  that the  Bodo clean up would be a litmus test for UNEP clean up of Ogoniland as well as the entire Niger Delta region.
He also explained that the Bodo clean up by Shell is not part of the federal government clean up of Ogoniland as recommended by UNEP.
“This first stage was to take a period of two years, along the line it was reduced from two years to one year and from one year to six months and now three months which is currently ongoing now, but we don’t know how effective the work that should have been done in six months will be accomplished in three months.
“The first stage is the removal of oil spills from the surface, and all the debris of the mangrove that was killed by the spillage.
“So far it has been a very high expectations from Bodo people, you know this is an international matter and the whole world is interested in the Bodo matter because we do represents one minuit section of the Niger Delta, which is entirely polluted.
“If we get it right at this point, it means that we can get other polluted areas in the region restored.”