…Call for resignation of NIMASA boss 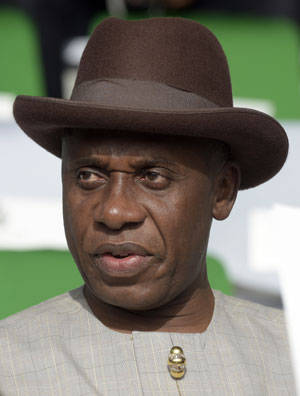 He spoke in response to the minister’s announcement last week that as long as he remained the minister, the fund would not be disbursed to anybody.

Amaechi had claimed that there was no proper structure in place for the disbursement of the fund, which currently stands at over N100 billion and which was created solely to empower local ship owners in the industry to enable them to compete favourably with their foreign counterparts.

But, countering the minister, Ogbeifun said the law required him (the minister) to establish guidelines for the disbursement rather than claiming that there were none.

He said: “The law requires that the minister sets up guidelines for disbursement. The law does not allow you to sit on the money doing nothing which is the situation we are in now and the ship owners are still contributing money to that fund up till now.

“Our tonnage is going down, seafarers are going out of the job, the businesses are collapsing and you are sitting on the money and in the midst of that, you are still collecting money in a regime where our shipping business is dying.”

Ogbeifun, who expressed his displeasure over challenges facing indigenous ship owners and the turn of event in the industry in the last two years, called for the immediate resignation of the Director General of the Nigerian Maritime Administration and Safety Agency, NIMASA, Mr. Dakuku Peterside.

According to him, while past NIMASA Director Generals have been sacked due to fraud-related cases, this is the time to have the political boldness to sack the present leadership of NIMASA due to lack of competence.

The SOAN president asserted: “We will be deceiving ourselves if we pretend not to know that the IMO (International Maritime Organisation) and the rest of the world are aware that our maritime domain has remained a high-security risk and it is most unsafe for seaborne trade owing to activities such as piracy, hostage-taking, and kidnapping.

“That 22 years after the demise of the Nigeria National Shipping Line (NNSL), we have not been able to midwife the emergence of a Nigerian fleet be it public or private fleet resulting from Public Private Partnership.

“IMO has passed a vote of no confidence on our maritime administration and if we do not do the right thing, which is taking the bold action of asking the leadership of the maritime administration to resign or the government should sack them. If we don’t do that, the International community that has not accepted us into the council will believe we are not ready to change.

“Government should stop giving excuses why they failed and look at issues in the industry. We have an administration for two and half year in office, things have gone worst, they have not even visited our maritime institution in Oron. Instead, we are spending money abroad; the international community is laughing at us because they know we do not know what we are doing, and we are saying enough is enough.”