SIFAX to make Warri Port Terminal B toast of clients 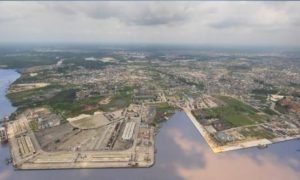 19 February 2019, Sweetcrude, Lagos — The Sifax Group has taken over as new operator of old Warri terminal B, Warri Port, with a pledge to keep to all agreements and promises made on running of the port.

Managing director of the company, Mr. Adekunle Oyinloye, who gave the assurance, said Ocean and Caro Terminal Services Limited, the new operators, will deliver on its mandate to make the place the toast of clients.

Speaking as he formally received the old Warri Terminal B of the port from the Nigerian Ports Authority, NPA, Oyinloye explained that Ocean and Caro Terminal Services Limited are indigenous companies that have come together to run the place.

According to him, the company has been a major player in the marine industry and will contribute to the growth of the local economy of the host communities while they go about their business.

Earlier, the Managing Director of NPA, Hadiza Bala Usman, who was represented by the Executive Director, Marine, and Operations, Mr. Seconte Davies, appealed to the host communities to encourage the new investors to succeed, urging them to also give room for the port to regrow the economy of the area and the region.