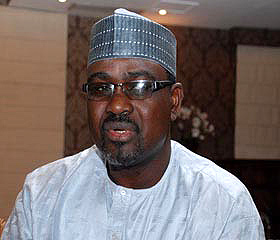 15 April 2014, Abuja – The Federal Government has decried the situation whereby the nation’s minerals and metals sector is being operated basically by Chinese and Indians.

The Minister of Mines and Steel Development, Musa Mohammed Sada, made this known during a meeting with officials of the Kaduna Chamber of Commerce, Industry, Mines and Agriculture (KADCCIMA), who paid him a courtesy visit.

To counter the unwholesome situation, he stressed the need for more collaboration between the ministry and its stakeholders in order to attract more Nigerians to the sector.
According to him, the Federal Government would want Nigerians to be major players in the nation’s mining operations.

Sada urged the delegation to develop a very strong working relationship with the ministry’s Mineral and Metals Promotion Unit.

He explained that this was essential in view of the fact that one of its responsibilities was to aid and guide investors with regards to the beneficial areas of mining in the country.

He said that the Federal Government was trying to promote the exploitation of clay resource, just as it had done with limestone resource, because the number of ceramic companies in the country was on the increase.
The minister assured the delegation of the ministry’s readiness to work with the association in order to give more Nigerians the opportunity to participate in the mining activities of the sector.

Sada reiterated the preparedness of the ministry to further strengthen the existing collaboration with stakeholders in the mining sector.

According to him, this is to effectively promote the minerals and metals sector of the nation’s economy,
He said the ministry was working assiduously to expand the base of its stakeholders as well as strengthen the existing relationship.

Sada added that this development led to the establishment of the Minerals and Metals Promotion unit in the Ministry with the sole responsibility of promoting the nation’s minerals endowment both at every local and international mining fora.

He noted that the only way information relating to mining could be sent out to people was by associating with organizations like KADCCIMA, he and that business thrived by partnering with relevant stakeholders.
According to Sada, the bulk of minerals occurrences, which are largely in the northern part of the country, informed the ministry’s full participation at the 35

Earlier in his address, the President of the Kaduna Chamber of Commerce, Industry, Mines and Agriculture (KADCCIMA) and leader of the delegation, Dr. Abdul- Alimi Bello, said the purpose of their visit was to express appreciation to the minister and the ministry for their participation in the 35th Kaduna International Trade Fair.
He said they also came to brief the minister on its activities.
The leader of the delegation said in its 40 years of existence, KADCCIMA had been making significant contributions towards
promoting the socio-economic growth of the northern part of the country and the nation at large.
He announced the upcoming Solid Minerals Exhibition to be organized by the association in Kaduna and requested for partnership with the Ministry as this would go a long way in creating more awareness on activities of the nation’s minerals and metals sector, an act which would complement efforts of the ministry.