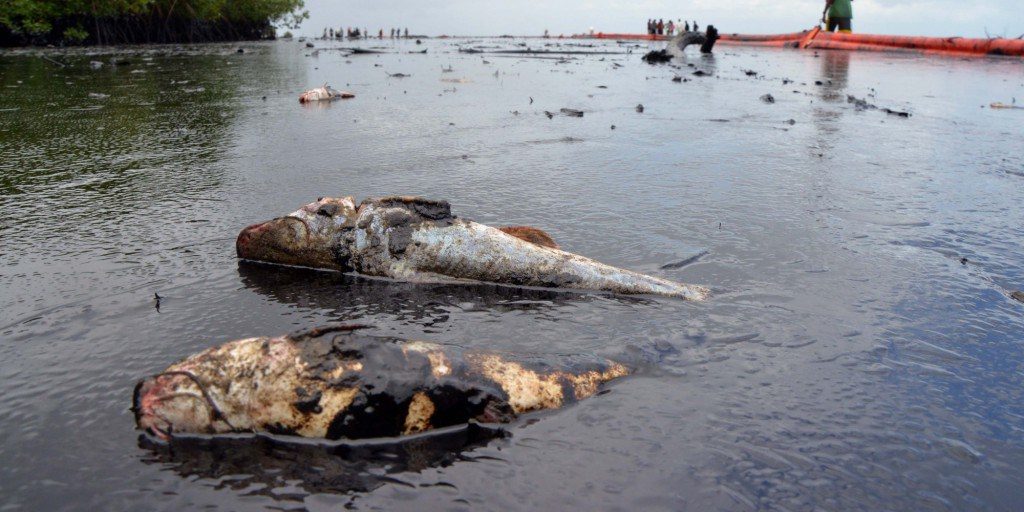 *The carcasses of dead fishes resulting from an oil spill.

Port Harcourt — The Shell Petroleum Development Company, SPDC, has denied discharging sludge and toxic chemicals from her operatiions at the Forcados oil export terminal, to pollute the Atlantic ocean.

This is as the Centre for Environmental Preservation and Development, CEPAD, recently accused the Dutch multinational of causing massive death of croaker fish specie along the Niger Delta coastline, through its operations in Forcados.

CEPAD Chairman, Furoebi Akene, had alleged that the dead fishes littering Niger Delta coastline were caused by the discharge of waste chemicals from Shell’s operations at Ogulagha in Delta State, into the Atlantic ocean.

Reacting to the allegation, the management of SPDC explained that the dead fishes littering the Niger Delta coastline has got nothing to do with its operations.

SPDC Manager, Media Relations, Bamidele Odugbesan, said the company was supporting Delta State government in investigating the cause of the death of fishes, as well as conducted a joint investigation visit the impacted coastlines.

Odugbesan emphasised that there was no oil leakage nor toxic discharge from SPDC activities linked to the dead fishes.

“The SPDC hereby clarifies that there is no release of dangerous, toxic or chemical substances from its operations at the Forcados Oil Terminal, or from its facilities in Ogulagha or any part of the Niger Delta where the company operates.

“Relevant government agencies are already investigating the alleged fish kill incident along the coastline in the Niger Delta and SPDC is supporting the investigations.

“The Nigeria Oil Spill Detection and Response Agency (NOSDRA) was widely reported to have clearly stated that there is no evidence that oil and gas operations may have impacted the aquatic environment as being claimed in respect of the fish kill incident.

“On our part, we are working with the relevant government agencies and the Delta State Ministry of Environment in the investigation of the allegation.

“We have conducted a joint investigation visit to the coastline, samples have been collected and testing is ongoing in accredited laboratories.”