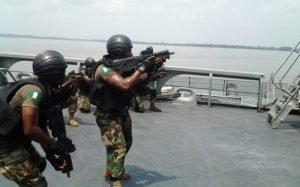 Lagos — The Israeli firm, Messrs HLSI Security Systems and Technologies, has commenced training of men and officers of the Nigerian Navy and the Nigerian Army in paratrooping and other military tactics.

The company was recently awarded a maritime security contract.

President of the Maritime Security Providers Association of Nigeria, MASPAN, Captain George Alily (rtd), who disclosed this, told SweetcrudeReports that sea and land training for the military personnel were taking place simultaneously.

Alily also said that besides the training, the firm would be bringing `some military soft and hardware to support Nigeria’s fight against piracy and make the nation’s territorial and coastal waters safe for shipping and economic activities.

According to the group’s president, whatever incident that takes place on the sea impacts heavily on the land and vice versa.

He disclosed that the infrastructure that the firm is putting in place will stem the menace of piracy on the maritime domain.

He stated: “Essentially, the brief we received from the immediate past Minister of Transport was quite expansive; the platform and security infrastructure they are putting in place will go a long way in stemming the menace of piracy.

He added: “So with that, they will be able to monitor whatever is happening in our waters. But beyond that, they are bringing in two platforms, two vessels that have the capacity to land helicopters and two fixed wings aircraft and a number of patrol aircraft.

“We were equally briefed that they were coming with two Armoured Personnel Carriers, APC, to provide a synergy between what happens on the waters and land.

“So, it is going to be a comprehensive thing but we have fears for a number of things like outsourcing our national security to foreigners but they tried to assuage our fears and I rather not discuss my fears about that.

“In totality, looking at it dispassionately, I do think it would help. We should get any help to engender better commerce, develop our economy and ensure that our waters are safe because premiums for commercial activities and for ships coming into our waters have hit the roofs.

“As we speak personnel of the Navy and the Army have started training in Elele and as at that time, they had concluded the first phase of their which was for three months and the training was extensive as they will be able to para-drop after the training.

“The contract is quite expansive and I will not be able to convey everything but it is anticipated that before long, sanity will be restored on our waterways.

“The firm equally did not stop at providing security on our waters, they are following the concept of the blue economy, Captain Alily said.