Surging oil output will push U.S. towards energy independence by 2020 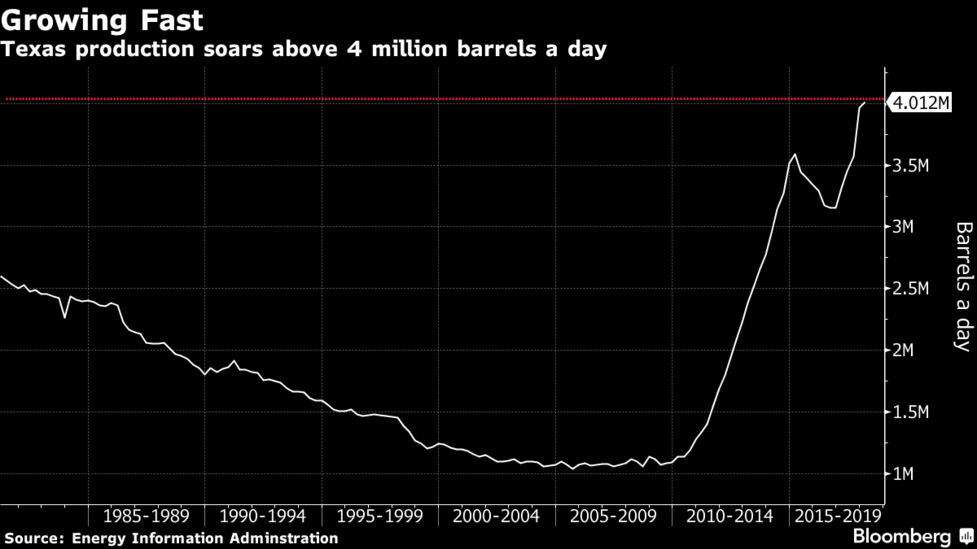 *The Department of Energy forecasts U.S. oil production will jump from 10.9 million barrels per day in 2018 to 12.9 million bpd in 2020
*The same year, the nation will start exporting more crude oil and fuel than it imports, the agency says
*Natural gas output is also seen hitting new all-time highs.

17 January 2019, London — The U.S. will make major strides towards energy independence in the next two years as oil production and exports hit new highs, according to the Department of Energy.

U.S. oil production, already at an all-time high this year, will increase by another 2 million barrels per day by 2020, the agency’s statistics bureau projects. The same year, the nation will start exporting more crude oil and fuel than it imports, the Energy Information Administration said in its latest forecast.

“According to the January outlook, the Permian region of Texas and New Mexico will continue to push U.S. production into record territory over the next 24 months, approaching 13 million barrels per day sometime in 2020,” EIA Administrator Linda Capuano said in a statement.

Most of the growth is coming from shale fields like the Permian, where frackers use advanced drilling methods known as hydraulic fracturing to free oil and natural gas from rock formations.

The U.S. already ships out more natural gas than it imports. Next year, gas production will jump another 8 percent to a new all-time high at 90.2 billion cubic feet per day, EIA projects. Growth in 2020 is seen slowing, with gas output hitting 92.2 Bcf per day.

By 2020, EIA thinks natural gas will generate 37 percent of the country’s electric power, up from 35 percent last year. Meanwhile, coal’s share of electric power generation will slip from 28 percent to 24 percent during the same period. That will help contribute to a further drop in U.S. coal production.