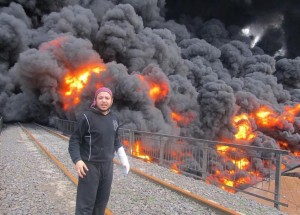 23 July 2014 Beirut – Syria’s oil sector has lost around $23.5 billion due to damage to facilities and pipelines, looting and production delays since the start of the country’s crisis in 2011 and output has fallen sharply, Syria’s oil minister said.

Syria is not a significant oil producer and has not exported any crude since late 2011, when international sanctions took effect to raise pressure on President Bashar al-Assad.

Islamist militants and other rebel groups control most of Syria’s oil producing regions and have seized oil and gas fields in recent weeks.

Syria’s oil minister said the sector had suffered 570 billion Syrian pounds ($3.81 billion) in direct losses such as damage to infrastructure and theft, and 2.95 trillion pounds of indirect losses due to halted production since the start of the conflict, according to the statement seen on Tuesday.

Output has been at around 17,000 barrels per day in the first half of 2014, the ministry said. Before sanctions Syria produced about 370,000 barrels per day (bpd), roughly 0.4 percent of global supplies, and exported less than 150,000 bpd, mainly to Europe.