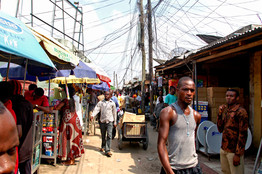 2 October, 2011, Sweetcrude, Abuja- Nigeria’s limp power sector may just be on its way to life if the body language of the present administration is anything to go by. What with the recent announcement that by the Minister of Power, Professor Bart Nnaji of the attainment of about 4,005 megawatts of electricity, so far the highest quantum of electric power ever generated in the history of the country.

More definitive are the actions of the Prof. Nnaji, who has only been on the hot seat for only about two months.
The distinguished Professor of Mechanical Engineering has since taken up his gauntlet with equal determination and zest, and has since embarked on a tour of all the nation’s power plants to physically ascertain their true conditions prior to further government investment and/or concessioning.

Over the past two months, the Minister has visited and observed forehand some of the rot in the nation’s ageing power plants, as well as the surging hope in the new Independent Power Plants, some of which are expected to roar into life in a matter of months.

Speaking recently during the 4th Nigeria International Power Expo and Conference, in Abuja, the Minister asked for support from the private sector to effectively drive the nation’s power reform, adding that the private sector stood to benefit more in the quest to improve power supply to about 40,000MW in the next ten years. He noted that the government was ready to support the development of local content in the manufacturing of equipment and components for the growth of the power sector.

He pointed out that the private sector and private suppliers of various components needed for the sector to move forward will be the main beneficiaries of the power sector reform.

He said, “Local content is going to be very important in our reform agenda; we want to encourage local manufacturers and support those who are making their equipment locally in Nigeria. Right now the country has slightly over 4,000MW of electricity and government’s plan is to have ten times that amount in the next ten years. 40,000MW of electricity in ten years time would mean huge investment; it would require huge equipment input to efforts in generation, transmission, distribution and supply.

“The importance of the private sector in this nation’s power revolution cannot be over-emphasised,” Nnaji added.
He said to underline the administration’s commitment to improving power supply in the country, the President holds bi-weekly meetings on power with select members of his cabinet to assess developments and issues in the sector. He added that, “We have all come to the agreement that our commitment should not merely be in terms of finance, because the problem of power in Nigeria is mainly that of structure. This is why one of the key programmes to revolutionise the power sector is privatization of major assets in order to get them working to full capacity.”

According to Nnaji, “There is a growing understanding on the part of government that distribution companies must be credit worthy so that they will be able to purchase power from generating companies and pay their bills.

Generating companies cannot have confidence to generate power unless they see that they can get paid for the power the produce. The same applies to suppliers who supply the fuel or gas for the running of the thermal plants.

“Unless that chain is totally incentivized to perform, meaning if the distribution companies are credit-worthy and are able to pay bills to generating companies who in turn are able to pay their bills to gas suppliers, the system cannot work. My job is to ensure that the entire value chain is fully aligned and performing effectively to provide adequate power to Nigerian homes and industries.”

He further explained that the privatization effort of the government does not mean completely abandonment of the vital sector, but it would ensure minimal government involvement in the business of producing and distributing electricity in the country. “It means that the 11 distribution companies would be privatized, the transmission company will be private-sector managed; the hydro stations will be concessioned and the thermal plants will be privatised

During the visit to Kainji Hydro Electric Plc, one of the oldest and most important hydro power plants in the country, the Minister had expressed outrage that such a critical power station built with enormous resources had been allowed to rot, with little or no effort made to ensure regular statutory overhaul and other maintenance.

Nnaji stressed the government’s determination to go ahead with the planned privatization or concessioning of power stations across the country to ensure that they are more efficiently run in the quest to rapidly improve the nation’s power generation capacity. This, he explained with the Power Sector Roadmap, which the President launched in August, 2010.

According to him, “The Roadmap is a complete plan of how to transform the power sector in Nigeria, and has been heralded by the international community as a very pragmatic and responsible tool for transforming the nation’s power sector. The roadmap is very clear and holistic, and it has set specific goals on where we want to be this year, next year; going forward, how we can realize the Vision 2020: it states what we want to do with regards to generation; how we can support generation with fuel for the power plants; it shows how we can improve transmission.

To this extent, the Minister has stressed that, as an immediate goal, government’s commitment to generating about 5000 megawatts of electricity for the country before the end of this year.

The Minister added that, “Power is a bit complex, but the inter-connectedness is well explained in the Power Roadmap. When you look at also the issue of value-chain, which talks about how you can incentivize people who produce gas for the power plants so they can produce gas to generate electricity. You can also incentivize those who generate so that they can produce enough for those who want to buy (distribution companies). These distribution companies also need to be incentivized so they can collect their money and be able to pay for the power they buy; it is a circle, and it all chained to the Power Roadmap.”

The Minister was also quick to dismiss fears expressed in some quarters, especially among union officials within the power sector, that concession of the plants and privatization of other power infrastructure across the country, especially the Power Holding Company of Nigeria (PHCN), would result in loss of jobs.

According to him, “You have two types of fears here, one is fear of change and in any place where there is a reform in the world, this fear will hold the people in that sector and so it is not different here. They are afraid of change. The second is fear of job loss. The workers are afraid that they will lose their jobs. But it does not make sense because we the concessionaires cannot manufacture workers from the air; it must be the same workers that are in the sector that will ultimately operate the sector.”

He stressed, however, that the government would not dictate to the concessionaires or new buyers on what to do with the workers. “They are at every liberty to manage the stations and equipment to the best of their ability.

The key words for any management of any company is efficiency and productivity. Where these are lacking, such a management are at liberty to sack or change things up in order to achieve the best environment for efficiency in their operations.

“Also, those who are not really competent may upon privatization, the companies may decide not to keep such workers. Anybody who is operating a business will want the people who are working to be competent. It is just normal.”

He added that the grand plan was definitely not to just leave the workers out there in the cold. “The plan had been let us ensure that the workers benefit; are taken care of and also apart from state government and the federal government, it is only the workers that are going to have shares in the companies. So, it is just fear which I understand. We believe that a segment of the workers union has been hijacked by interest group.”

In this connection, many have argued, Prof. Barth Nnaji is most-suited to drive the power sector ambitions of the new administration. They assert that in order to effectively jump start the reform in the power sector, the nation needs a professional that can approach equity with clean hands. The nation needs an individual that can effectively challenge naysayers with clean conscience and no personal interest while pushing for a successful implementation of the power sector reforms. In the final analysis, they say, Nigerians need abundant, affordable, modern energy, and this points to private property and free markets and not government ownership and control of energy resources as is currently being pursued. The role of government should start and end with regulation.