There is no missing N165bn in NPA – Bala Usman 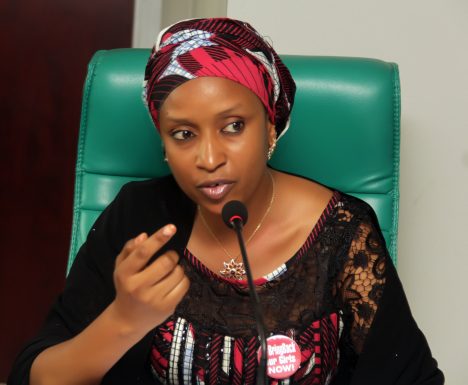 Lagos — Embattled Managing Director of the Nigerian Ports Authority, NPA, Ms Hadiza Bala Usman, has responded to claims by Rotimi Amaechi, Minister of Transport that the NPA’s remittance has been far short of the amount due.

A letter circulating on social media, purportedly from the NPA, signed by Usman and addressed to the Chief of Staff to the President regarding the  approval by President Muhammadu Buhari for the Ministry of Transportation to audit the accounts of the NPA disclosed that the 2017 and 2018 remittances to the Consolidated Revenue Fund (CFR) were N42.415 billion and N33.969 billion, representing an 80 per cent surplus for both years.

“The Audit of the 2019 Financial Statement has been completed and awaiting consideration of the Authority’s Board, at which point the final figures for the 2019 operating surplus will be determined for consequent computation of the amount due for remittance to the CFR,” Usman disclosed in the letter.

Usman’s response addressed a letter by the Minister of Transport, Rotimi Amaechi that claimed records from the Budget Office of the Federation showed that the remittances by the NPA from 2016 to 2020 “have been far short of the amount due for actual remittance”.

In her letter, Usman clarified that the NPA had “remitted the full amount due to CFR for the periods of 2017 and 2018 arising from the Operating Surplus derived from the Audited Financial Statement for the period totaling N76.384 billion as evidenced in attached treasury receipts”.

She further said that the period of 2019 and 2020 saw the NPA remit a total of N82.687 billion “pending the audit of the financial statement at which point the amount so computed arising from the value of the Operating Surplus in the audited financial statement will be remitted to the CFR”.

Usman asked that the Office of the Accountant General of the Federation provide further clarification on the remittances. An investigative panel was however announced by the president’s spokesman Garba Shehu to look into the allegations of the misappropriated N165 billion.