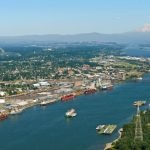 Winnipeg, Manitoba — Thousands of longshore workers at Canada’s biggest port, the Port of Vancouver, were locked out on Thursday, the Canadian Broadcasting Corp. said.

The B.C. Maritime Employers Association, which represents 55 companies, such as ship owners and terminal operators at the port, issued a notice this week that it would lock out some 6,000 workers who load and unload ships due to a labor dispute.