Port Harcourt — The federal government and oil operators must apologise to the people of the Niger Delta, for wrongly criminalizing and labelling them as oil thieves, whereas the real oil theft is a huge industrial scale operations as currently exposed by Tompolo, the Health of Mother Earth Foundation has said. 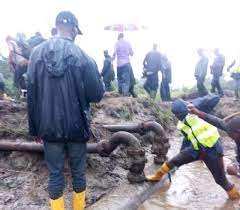 This is as operatives of Tantita Security Services, a firm operated by Chief Government Ekpemupolo (alias Tompolo) in recent time has made series of discoveries of over 100 illegal pipelines and tap points attached by oil thieves on NNPC trunkline in Bayelsa and Delta States alone, with some of the illegal lines running as far as 7km into the sea.

Executive Director of HOMEF and Environmental Rights Advocate, Rev Nnimmo Bassey, opined that it was not possible for illegal pipeline to be attached to NNPCL trunkline for over nine years, without the knowledge of the oil companies, including the NNPC and related regulatory agencies.

Bassey, who holds a National Honour of Member of Order of Federal Republic (MFR) for environmental activism, emphasised that all public agencies in the oil and gas sector should be closed down and reconstituted, if the country is serious in the fight against oil theft.

The environmentalist urged the federal government to speedily embark on a high powered independent investigative panel to expose and prosecute all those directly or remotely connected to the criminal activities of oil theft.

He also called for urgent demilitarization of the Niger Delta region, saying that the presence of the military encourages economic sabotaging, orchestrate human rights abuses and locked in ecocide.

“Action must be taken now to ensure a halt of this daylight robbery. The government and oil companies should indeed apologize to the traumatized peoples of the Niger Delta for wrongly criminalizing them and calling them oil thieves.

“We have been saying for years that oil theft in the Niger Delta isn’t carried out in buckets and jerrycans. It has been a huge operation as we now see. Clearly the oil companies are complicit in this horrendous thievery.

“It can be said of the security forces who have turned the Niger Delta into a crude casino since the early 1990s. Some highly connected persons must be involved also in the infernal scheme. There have been stories of ships loaded with crude oil escaping from Nigerian waters as if we don’t have security agencies.

“The oil companies, including the NNPC and related regulatory agencies must have known all about these. This is why diversionary processes may have been orchestrated to promote and encourage minor thieving by illegal refiners so as to claim that their action was responsible for the collapse of the petroleum revenue stream in Nigeria.It should be clear who has bled the nation dry and cut short the lives of the people of the Niger Delta.

“With the discovery of some illegal crude oil export lines it is becoming likely that whereas the country may have claimed to be exporting 2million barrels of crude oil per day, the true figure may have been more than double that.

If the level of stealing exposed by Chief Tompolo’s company is an indicator of the rot in the system, we should see that the oil companies may be divesting because they know that the oil wells have been stolen dry.

“In other words, the days of significant crude oil extraction in Nigeria is over. The so-called divestment is a clever attempt to escape culpability when the excreta hit the ceiling.”

Asked if Tompolo’s security capabilities was superior to the nation’s security architecture over the successes recorded so far by Tantita, Bassey said, “If the security agencies claim they weren’t aware of the goings in the creeks and ocean, that means that we do not have security at all, not just in the Niger Delta but in the entire nation.”