Trump says other countries should do more to protect oil tankers 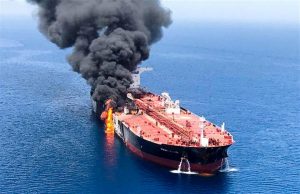 *One of the oil tankers attacked in the Strait of Hormuz.

Washington — U.S. President Donald Trump said on Monday that other countries, including China and Japan, should protect their own oil tankers in the Middle East.

“So why are we protecting the shipping lanes for other countries (many years) for zero compensation,” Trump said on Twitter. “All of these countries should be protecting their own ships on what has always been a dangerous journey.”

Trump made the comments amid an escalation in tensions with Iran, as Washington has blamed Tehran for attacks on two oil tankers, owned by Japan and Norway, in the Strait of Hormuz and the downing of a U.S. drone off the coast of Iran. Both Washington and Tehran have said they do not want a war.

The United States is expected to unveil new sanctions against Iran on Monday, aimed at further restricting Tehran’s resources.

Trump’s remarks echo those he has made about the North Atlantic Treaty Organization (NATO). He has called for the alliance’s member nations to spend more on defense.