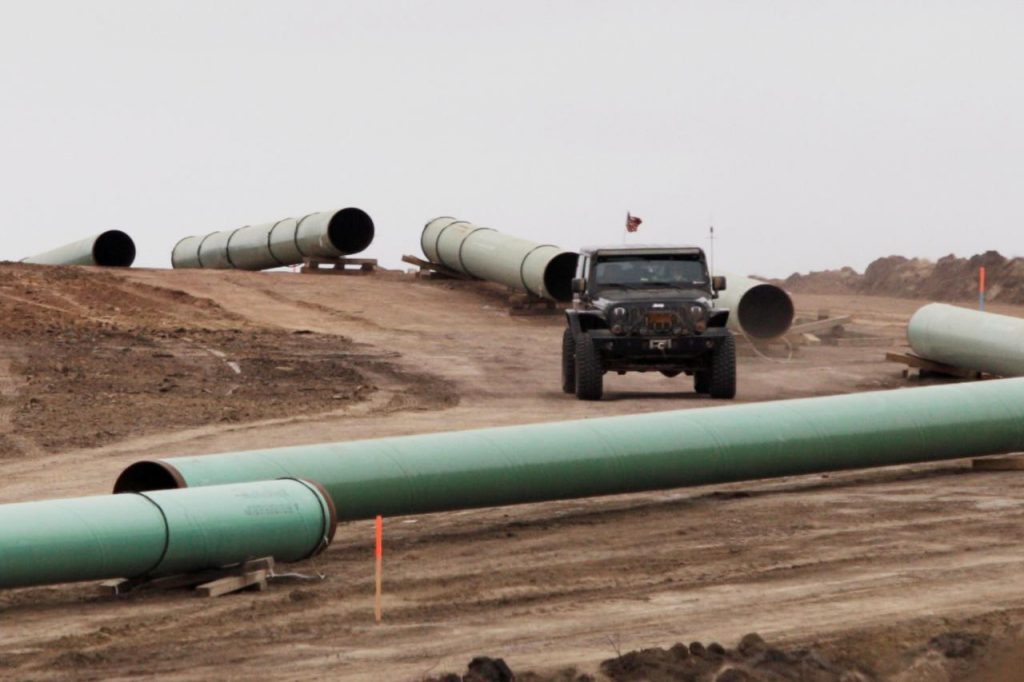 *A vehicle drives next to a series of pipes at a Dakota Access Construction site near the town of Cannon Ball, North Dakota, U.S., on October 30, 2016. REUTERS/Josh Morgan/File Photo

11 August 2018, Houston, Texas — U.S. President Donald Trump’s proposal to double tariffs on steel and aluminum from Turkey could push up costs even further for domestic oil and gas pipeline projects, as energy executives said they were already struggling from earlier tariff rises.

There are more than a dozen U.S. energy pipelines on the drawing board, some of which are still seeking financing. The projects would pave the way for greater U.S. oil and gas exports and relieve a bottleneck in West Texas shale fields that is starting to pinch output in the region.

Turkey delivers just 4 percent of steel mill imports, valued about $1.18 billion last year, according to the U.S. Department of Commerce. But doubling tariffs on a supplier could force buyers to turn to other steelmakers and, in turn, lift steel prices that have already ballooned in recent months.

On Friday, Trump authorized a doubling of tariffs on Turkish steel and aluminum imports – to 50 percent and 20 percent, respectively – ratcheting up a diplomatic dispute with the NATO-member country.

The Trump administration’s original move in March to raise tariffs on most steel and aluminum imports was proposed to safeguard U.S. jobs against overseas rivals.

That had already added $40 million to the cost of a Plains All American (PAA.N) crude oil pipeline that will use steel supplied by a Greek company, Plains executives said.

“We are moving forward with the project, but believe that imposing a tax on pre-existing orders is unjust, especially considering the specific materials we purchased abroad were not readily available in the U.S.,” Willie Chiang, Plains’ chief operating officer, said on Tuesday.

The Houston-based company on Friday declined to comment on the impact on the project of the doubling of the tariff. The $1.75 billion Gulf Coast Express is a natural gas line being constructed from West Texas to the U.S. Gulf Coast.

Kinder Morgan had applied to the U.S. Commerce Department for an exemption to the original, 25 percent tariff but had not yet received a decision, the spokeswoman added.

“The Turks can export to many other countries, but with a weak lira, their products become cheaper to buy. The cheap lira actually can help increase their export volume,” said George Gero, a managing director at RBC Wealth Management who follows metals markets.

Steel futures on Friday were up 1 percent at $907 per ton on the New York Mercantile Exchange, but are up 46 percent from $621 per ton a year ago.