Lagos — The leadership of the Truck Transit Park, TTP, has that the failed portion of the road coupled with the slow pace re-construction works on the Wharf Road are reasons for recent traffic gridlock being experienced around the Ijora-Apapa axis.

Speaking at Oil and Gas Maritime Shipping award held in Lagos weekend, Managing Director of TTP, Mr. Jamal Onwubuariri said that the recent traffic situation has affected the number of trucks being moved into the ports to evacuate cargoes. 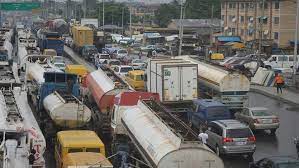 Onwubuariri also said that because of the situation, trucks have had to be channel through one-way traffic adding that the moment the re-construction was completed, the number of trucks going into the ports will increase.

He said: “We have two major issues at the moment, one major issue is that there is a failed portion of the road by Naval Dockyard which makes it dangerous for trucks to pass so trucks need to wait sometimes for some palliatives to be done on the road for them to be able to pass. So that is affecting the free flow of traffic that side.

“Because the whole of Wharf Road is also being re-constructed, and the work is going on at a place slow pace and because of this, it is difficult to move the same numbers of trucks we were moving a few weeks ago through that part of the road.

“Because of this, we now have to channel some trucks coming out of the ports through one-way. The side that was supposed to be inbound into the port is now being used for both inbound and outbound.

So, these three factors combined makes it difficult for us move trucks at the same pace as we were moving them a few weeks ago so we are hoping that the road construction will be completed very soon, and the palliative being done on the Naval Dockyard be completed quickly so that we can resume the normal movement of trucks.”

He also disclosed that the cost of haulage has slightly increased due to to these factors adding that FTP is currently engaging with the Lagos State Government and other stakeholders to hasten up the road re-construction.

Abass disclosed that vessels were now being stemmed ports outside Lagos without the consent of the thereby bringing more cost on both the importer, Customs broker and the shipping company.

He said: “Agents because of the road repair now incur additional bills form the terminal operator just as importer pay additional terminal charges, demurrages for trucks and loss of cargoes to hoodlums.”