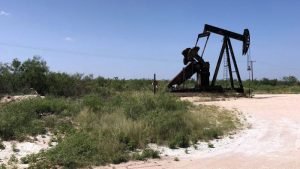 News wire — U.S. energy firms added oil and natural gas rigs for a record 16 months in a row as crude prices in recent weeks rose to a seven-year high, prompting some drillers to return to the wellpad.

The oil and gas rig count, an early indicator of future output, rose six to 569 in the shortened week to Nov. 24, its highest since April 2020, energy services firm Baker Hughes Co said in its closely followed report on Wednesday. RIG-

Baker Hughes released the rig count data a couple of days earlier than usual due to the upcoming U.S. Thanksgiving holiday on Thursday.

In November, the count gained 25, the biggest monthly increase since January, according to Baker Hughes data.

After closing at their highest levels since October 2014 earlier in the month, U.S. crude futures were trading around $78 per barrel on Wednesday.

However, shale producers are tapping the brakes on reinvestment. The rate at which they put cash from operations into drilling for oil and gas fell to a record low last quarter, data from consultancy Rystad Energy showed, as those firms returned cash to shareholders through dividends and stock buybacks.

The third-quarter reinvestment rate was 46%, below the historical average of 130%, Rystad said in a report this week. Reinvestment could fall further, its analysts said.

Oddly, an even bigger price increase in natural gas – futures were up 102% so far this year – has not yet encouraged drillers to seek more gas.

The oil rig count was up about 75% since the start of the year, while the number of active gas rigs was only up about 23%.