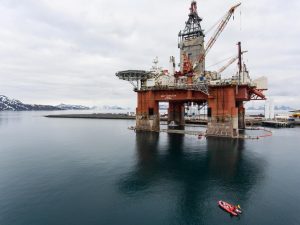 The proposed changes are described in a draft environmental impact statement for managing the National Petroleum Reserve in Alaska, a 23 million-acre (9.3 million-hectare) unit of federal land on the western side of Alaska’s North Slope.

The draft, released late on Thursday by the Bureau of Land Management, contains a set of options. The most aggressive would allow oil development in 81 percent of the reserve. Under the Obama-era management plan enacted in 2013 and currently in effect, about half the reserve is open to oil development and half is protected for its wildlife and cultural values.

“With advancements in technology and increased knowledge of the area, it was prudent to develop a new plan that provides greater economic development of our resources while still providing protections for important resources and subsistence access,” Chad Padgett, BLM’s Alaska state director, said in a statement released on Thursday.

The draft environmental impact statement is subject to a 60-day public review. A final statement and an action decision are expected to follow, the BLM said.

Also Read: Aramco IPO: It’s a thanks, but no thanks from Malaysia’s Petronas

A former Obama administration official who helped craft the 2013 plan said the push for expanded drilling access is part of a pattern of Trump-era environmental rollbacks.

“It kind of gives some of us who worked on the plan a sad feeling,” said Pat Pourchot, the Interior Department’s former top Alaska official and now a board member of the Alaska Wilderness League.

“Does oil and gas trump everything in terms of natural resources? Is that the first and highest value for every acre of federal lands? I would think not,” he said.

The Trump administration has taken other steps to open up Arctic Alaska territory to new oil development.

The BLM is planning for a lease sale in the coastal plain of the Arctic National Wildlife Refuge on the eastern side of the North Slope, an area that lost its decades-long protective status when Congress passed the 2017 tax overhaul bill. That bill contained a provision requiring oil leasing in the refuge.