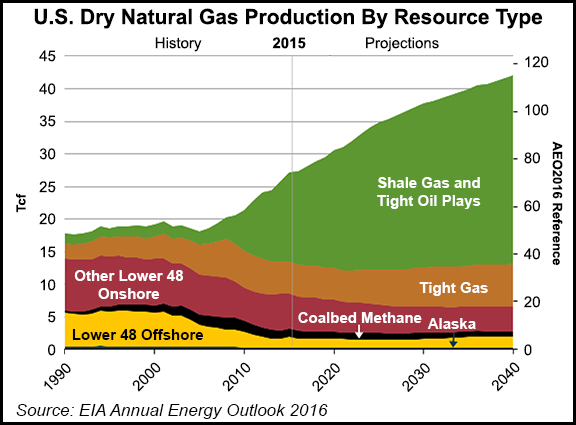 London — U.S. dry natural gas production will rise to an all-time high of 92.13 billion cubic feet per day (bcfd) in 2019 from a record high of 83.80 bcfd last year, the Energy Information Administration said in its Short Term Energy Outlook (STEO) on Wednesday.

The latest output projection for 2019 was up from EIA’s 91.63 bcfd forecast in October.

EIA also projected U.S. gas consumption would rise to an all-time high of 85.10 bcfd in 2019 from a record 82.50 bcfd a year ago.
The 2019 demand projection in the November STEO report was up from EIA’s 84.25 bcfd forecast for the year in October.

The EIA projected gas would remain the primary U.S. power plant fuel in 2019 and 2020 after supplanting coal in 2016.

But in 2018, energy-related carbon emissions rose for the first time in four years to 5,269 million tonnes due to a booming economy and higher gas consumption during a colder winter and warmer summer.