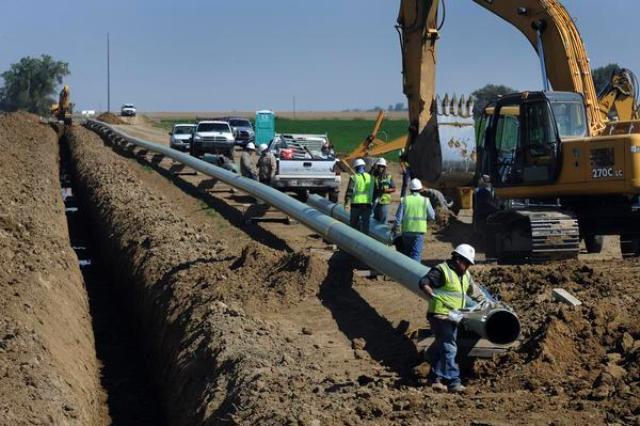 13 October 2017, Houston — As shale oil producers have rushed back into the Permian Basin after a downturn, U.S. pipeline firms have scrambled to plot new pipelines to take all that petroleum from West Texas to refineries, export hubs, and petrochemical plants.

But operators with plans for up to 20 new lines are now selling stakes in some of those projects amid concerns that production could fall short of the volumes needed to fill them.

“I suspect some projects will disappear altogether,” said Roberto Simon, America’s head of natural resources and infrastructure for investment bank Societe Generale. “Not everyone is going to be viable.”

The shakeout comes despite record crude volumes being pumped now in the Permian, the largest U.S. oilfield, after a two-year downturn that started in 2014.

Production from the Permian Basin is up 24 percent since the year began, to 2.6 million barrels per day. It has sold at a discount since August to benchmark crude oil stored at Cushing, Oklahoma, according to Reuters data, a reflection of congested pipelines.

But the competing pipeline projects, taken together, would add an enormous amount of pipeline space that even record production might not fill. If all nine new or expanded crude lines were built, it would nearly double the region’s current capacity of 2.4 million barrels per day.

Rather than compete for the same customers, the pipeline firms are seeking to cut deals to ensure they can guarantee the energy supplies to fill the lines. None have formally dropped out of the competition, but a hunt for partners signal that the winnowing process has begun.

“There is a lot of money chasing the opportunity right now,” said Whit Keuer, a partner in consulting firm Bain & Company’s oil and gas practice. “We would expect a pretty big shakeout.”

NuStar Energy, which plans a $1-billion crude pipeline out of the Permian, is in talks with other companies about selling a stake and obtaining access to fuel in the region, said Danny Oliver, NuStar’s senior vice-president of marketing and business development.

“If it puts us ahead of the competition and gets a deal done, we would be absolutely open to something like that,” he said.

Some analysts say output can accommodate many of the new transportation lines. Permian production – which accounts for the vast majority of U.S. output gains – should rise through 2026, estimates Alex Beeker, senior research analyst at consultancy Wood Mackenzie.

Others think it could peak sooner. U.S. oil output could experience a final spike next year before growth flattens as rising costs make it unprofitable to drill many fields, Ian Taylor, chief executive of oil trader Vitol, said this week.

NAmerico would swap equity for a producer’s volume commitment or join with another pipeline and gas gathering company if it would help provide access to more natural gas, he said.

Privately held Permico Energia, which is planning a liquid natural gas pipeline, is negotiating a potential sale of a stake to energy producers for cash and a supply commitment, said Chief Executive Jeff Beicker.

Permico would consider folding in its project with another pipeline if one approached Permico with a strong case for a consolidation, he said.

It still would welcome supply deals with more energy producers and processors, he said.

The competition for deals to fill the pipelines is so fierce that margins for operating the lines are likely to be thin without consolidation, said Libby Toudouze, portfolio manager at Cushing Asset Management, which invests in energy producers and transportation companies.

Private equity investors have so much capital to invest that they are willing to do so at prices that might not initially produce profits, she said.

“You’ve got some competition in there that is willing to be a loss leader,” Toudouze said.