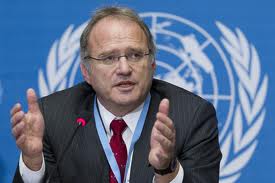 28 August 2012, Sweetcrude/African Press Organization (APO), GENEVA, Switzerland – The United Nations Special Rapporteur on extrajudicial, summary or arbitrary executions,  has called on the Government of Gambia to refrain from executing a further 39 individuals reported to be on death row, following the executions of nine persons on 26 August 2012. Prior to these executions the last official execution in the country took place in 1985.

“I strongly condemn the executions that took place last week in the Gambia, and call for a halt to further executions,” Mr. Heyns said. “This stream of executions is a major step backwards for the country, and for the protection of the right to life in the world as a whole.”

“These executions undermine previous steps towards the abolition of capital punishment in the Gambia,” stressed the human rights expert, recalling that the country was at the forefront in the region’s efforts to abolish in law and practice the death penalty, with a moratorium on the death penalty for 27 years and the abolition of capital punishment for drug offences in April 2011.

“I am concerned that death sentences were imposed in violation of major international standards, including the most serious crimes provisions. According to available evidence the trials did not meet due process safeguards,” Mr. Heyns underscored. “The executions were carried out in secrecy, away from the public and from the families, and do not meet the requirements of transparency.”

President Yahya Jammeh plans to see that the executions are “carried out to the letter” in the next few weeks.

The Special Rapporteur will present his next report to the United Nations General Assembly on major issues relating to the imposition of the death penalty in October this year.