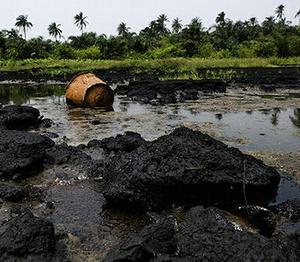 01 August 2012, Sweetcrude/African Press Organization (APO), NAIROBI, Kenya – The UN Environment Programme (UNEP) has welcomed the Government of Nigeria’s decision to proceed with a major oil contamination clean-up of Ogoniland in the Niger Delta.

The report emphasized the need for swift action to prevent the pollution footprint from spreading further and exacerbating the already tragic legacy for the Ogoni people.

The clean-up will reportedly be conducted under a new Nigerian government initiative—the Hydrocarbon Pollution Restoration Project.
The Government of Nigeria has indicated that it will now define the scope, actions and financing of the project.

The UNEP Environmental Assessment of Ogoniland had proposed an initial sum of US$1 billion to cover the first five years of clean-up operations.

While some on-the-ground results could be immediate, overall the report estimated that countering and cleaning up the pollution and catalyzing a sustainable recovery of Ogoniland could take 25 to 30 years and will require long term financing.

Achim Steiner, UN Under-Secretary General and UNEP Executive Director, said today: “On the anniversary of the Ogoniland assessment there are now clear and encouraging signals that the government is keen to move on the recommendations—this is a welcome development for the people and the environment of this region who have suffered, and continue to suffer, the legacy of some 50 years of unsustainable oil exploration and production.”

“UNEP stands ready to assist the government and its agencies with expertise for getting the Hydrocarbon Pollution Restoration Project up and running so as to improve the lives and livelihoods of the Ogoni people,” he said.

Over recent weeks, UNEP has held discussions with Sir Peter Idabor, the Director-General of the National Oil Spill Detection and Response Agency (NOSDRA) and is engaged with the government to chart transformative pathways forward in order to realize the assessment’s recommendations.

“The immediate need is for the necessary funds to be mobilized and to be deployed to take the Project forward at a scale and speed commensurate with the challenge. Everyone has a part to play in realizing significant and positive results from the Government of Nigeria, local authorities and the oil industry to NGOs and local communities,” said Ibrahim Thiaw, Director of UNEP’s Division of Environmental Policy Implementation, who on 4 August last year presented the UNEP report to the government.

It woill be recalled that in compiling its two-year scientific assessment, the UNEP team examined more than 200 locations, surveyed 122 kilometres of pipeline rights of way, reviewed more than 5,000 medical records and engaged over 23,000 people at local community meetings.

Altogether more than 4,000 samples were analyzed, including water taken from 142 groundwater monitoring wells drilled specifically for the study and soil extracted from 780 boreholes.

In one community, at Nisisioken Ogale, in western Ogoniland, the report found that families were drinking water from wells that was contaminated with benzene – a known carcinogen – at levels over 900 times above World Health Organization guidelines.

The Environmental Assessment of Ogoniland report is available online at: www.unep.org/nigeria. Site-specific fact sheets containing detailed information about 67 of the contaminated sites studied in detail are also available at this website.

In August 2011, President Jonathan set up a government committee to review UNEP’s report and make recommendations on immediate and long-term remedial actions.

Since handing over its report, UNEP has signaled its willingness to be a partner in the environmental restoration of Ogoniland and its surrounding creeks, in conjunction with the government, the oil industry and the traditional rulers and people of Ogoniland.