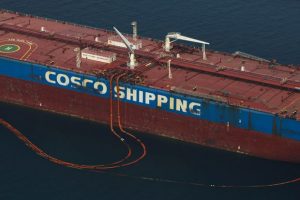 London — China’s Unipec has resumed using tankers owned by COSCO weeks after it suspended bookings due to U.S. sanctions on some of the Chinese shipping company’s subsidiaries, trade sources said on Tuesday.

Refinitiv data showed one COSCO owned tanker – belonging to a subsidiary not affected by the U.S. sanctions – was sailing to Asia with a cargo of oil chartered by Unipec, the trading arm of Asia’s top oil refiner, Sinopec.

Sinopec officials did not immediately respond to requests for comment after business hours.

In one of the biggest sanctions actions taken by the U.S. government since its crackdown on Iranian oil exports, Washington on Sept. 25 announced sanctions on Chinese tanker companies, including COSCO Shipping Tanker (Dalian), a subsidiary of China’s state-owned shipping group COSCO.