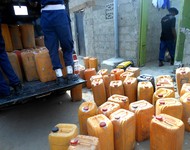 The suspects were also said to have attempted to bribe some NSCDC men with N40,000.

The state commandant, Clement Adesuyi, said the suspects, Abu Idris, and Kunle Ayandokun, were arrested in the Coconut area of Apapa.

Adesuyi said 66 jerry cans, each containing 50 litres of petrol, were recovered at the point of arrest.

He said, “We arrested the two suspects around the creeks in Apapa. Three speed boats belonging to the suspects were impounded with 66 kegs of petrol. Investigations are ongoing and they will be prosecuted.”

Adesuyi urged Lagosians to continue to give the corps information that would lead to the arrest of pipeline vandals.

The commandant said the N40,000 had been registered as exhibit.

The suspects, however, said they were not pipeline vandals, but boat operators.

Thirty three-year-old Ayandokun said, “I am not a pipeline vandal. I am a speed boat operator and I also sell engine oil at Coconut. In addition, I am a member of the Maritime Workers’ Union. Some guys store and sell fuel where I operate, but I don’t relate with them.

“On Sunday, some NSCDC men stormed our area in a bid to arrest pipeline vandals, but the guys, who usually sell fuel, immediately jumped into the water and swam. Civil defence men then entered my boat and told me to help them chase the fleeing suspects.

“When they could not get the suspects, they loaded some of the stolen fuel unto my boat and told me to take them to Iddo. On getting to Iddo, they said I was among the pipeline vandals and put handcuffs on me. I have told them all I know, I don’t sell fuel, I didn’t even know that the fuel was stolen.”

The second suspect, Idris, said he knew nothing about the stolen fuel.

However, the 38-year-old indigene of Ondo State confessed to have offered the civil defence men a bribe.

He said, “When the NSCDC men stormed my base, the guys selling fuel all jumped into the water, but I did not run. When they were interrogating me, they said I should produce Bode. I know Bode sells fuel, but I did not know he was a pipeline vandal.

“As they were taking me away, Bode sent someone to give me N40, 000 which I would use in bailing myself. When I handed the civil defence men the money, they collected it, but still arrested me.”