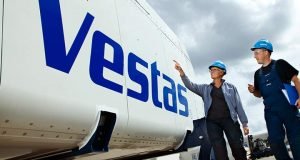 19 October 2017, Copenhagen — Denmark’s Vestas will help to build the world’s first utility-scale project that uses battery technology to store power from both wind and solar sources, it said on Thursday.

The project in Australia aims to bring down the cost of renewable energy production and help secure a steady supply of renewable power to the grid regardless of weather conditions.

It will use batteries supplied by U.S. electric carmaker Tesla Inc and is expected to generate enough power to supply more than 35,000 average Australian homes.

The Danish wind turbine maker said it had teamed up with project developer Windlab and Quanta Services.

Vestas will deliver the technology for the 60.2 megawatts (MW) Kennedy Energy Park phase I that will be built in Flinders Shire in central north Queensland.

With years of rapid growth in demand in the wind industry fading, Vestas is positioning itself as a provider of broader renewable energy.

The cost of renewable energy has dropped significantly in recent years with solar leading the way, while Tesla is leading the way in battery storage.

Vestas has said it expects wind power to be profitable even without government subsidies in the next decade. Goldman Sachs analysts predict renewable energy in Europe will be cheaper than fossil fuels by 2023.

The Australian project will consist of 43.2 MW of wind power capacity using twelve of Vestas’ V136-3.6 MW turbines, 15 MW of solar and 2 MW of battery storage.

Vestas Chief Executive Anders Runevad told Reuters in June he aimed to bring such hybrid projects, which are currently small and few in number, up to utility-scale.

The Kennedy project is owned by a joint venture between Windlab and Eurus Energy Holdings Corp. of Japan.