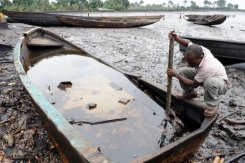 2 October, 2011, Sweetcrude, WARRI- INHABITANTS of Oviri-Olomu community in Ughelli-South Local Government Area of Delta State have called on the Shell Petroleum Development Company, SPDC, to urgently come to their rescue by cleaning up the oil spill from its pipeline, which ruptured in August, at Egbefa, destroying aquatic lives and farm lands.

A resident in the communinity, Mr. Peter Ogho, said, “When the oil spill occurred in August we wrote to SPDC and they sent people to come and see, after they left, they have not come back to clean it. We are worried about their silence because it is not safe for us, we saw what happened to Jesse people and we don’t want such occurrence here”.

“We are using this medium to call SPDC to hasten up and come to clean up the spill, our lives are at risk. It is not a bad thing that oil is found in our community. Please, come to our aid, we need immediate answer to clean up the oil before it catches fire.”

A fisherman, Idu Ogagarogbe lamented, “I have lost everything to the spill, I lost my nets, life has been very hard for me and my family since then, I want SPDC to come quickly to clean up the area, at least they are aware that their pipeline had ruptured.

“They know it is natural occurrence, if it is man-made, then we would have the blame, I wonder why they have not come since over a month ago. My source of livelihood is gone, I need serious help”, he stated.

Two persons who went for fishing died from oil pipeline fire, about two months ago, at Kunukunuma community of Warri South-West Local Government Area because of the failure to clean up an oil spill that occurred in the area on time. Also, a fire explosion killed many people in Okpe council area of the state in August following the failure of the operators to clean up an oil spill cause d by sabotage.