Who is Shell’s new CEO Sawan? 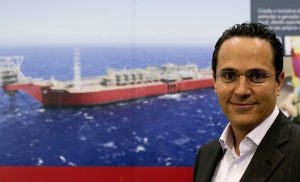 *Wael Sawan, Executive Vice President for Shell’s deepwater division, poses for a picture before an interview for Reuters during an oil conference in Rio de Janeiro, Brazil. REUTERS/Bruno Kelly

News wire — Shell named Wael Sawan, head of its integrated gas and renewables division, on Thursday as the group’s chief executive officer, replacing Ben van Beurden, with the energy major at the cusp of a transition to cleaner energy.

Sawan, 48, currently oversees Shell’s growth into low carbon energies, as well as its giant gas business. He was seen as the front-runner to succeed van Beurden, Reuters reported earlier this month, and will inherit one of the industry’s most ambitious green targets.

Here are some facts on the new boss:

* A Canadian citizen of Lebanese origin, Sawan has been heading Shell’s integrated gas, renewables and energy solutions division since November 2021.

* Sawan begins as CEO on Jan. 1 and Shell Chair Andrew Mackenzie said of his appointment: “Wael Sawan is an exceptional leader, with all the qualities needed to drive Shell safely and profitably through its next phase of transition and growth.”

* Born in Beirut in July 1974, Sawan grew up in Dubai and is an alumni of Harvard Business School. He graduated with a master’s degree in chemical engineering from Canada’s McGill University.

* Sawan joined Shell in 1997 and has been a member of the group’s executive committee for three years._

* Before taking up his current role, Sawan was director of Shell’s upstream business where he oversaw the divestment of the Permian business and decision to exit onshore Nigeria.

* Sawan also had stints with Shell’s deepwater and Qatar operations during a 25-year career spanning roles in Europe, Africa, Asia and the Americas.

* The 48-year old has three sons with wife Nicole.