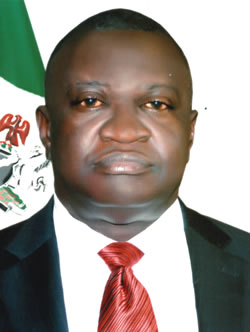 20 April 2018, Sweetcrude, Port Harcourt – The Director General of the National Oil Spills Detection and Response Agency, NOSDRA, Peter Idabor, has explained why the amendment of the NOSDRA Act is necessary.
Idabor said an amendment of the current NOSDRA Act was seeking for increased funding for the agency, so as enable it to be at par with standard as obtainable in other countries of the world.
Speaking at the joint activation exercise of the National Oil Spill Contingency Plan with the Nigerian Agip Oil Company in Port Harcourt, Idabor said NOSDRA has the capacity and personnel to do the job, but poor funding and lack of equipment was mitigating against the agency.
The NOSDRA boss responding to questions on the challenges impeding the agency from operating optimally, explained that the only solution was for the NOSDRA Act to be amended.
He explained that apart from increased funding, the amendment was also seeking for civil actions against erring operators,  seeking to impose fines on operators to serve as deterrence as well as capacity building for its personnel.
According to him, “We are very lucky that we have not had a major spill, that is bigger than the Bonga. For instance, if there is a spill from Nigeria, it will go into neighbouring countries like Cameroun, knowing that most West African countries are connected by the Atlantic ocean.
“If there is a major spill, like now we have been warned that some oil fields around Cotonou will soon erupt and we should get ready. Are we really ready? We can only be ready if there is proper funding, proper equipment, proper infrastructure and adequate personnel.
“It is not good for us to wash our dirty linens outside, but I have to tell you that we have a long way to go. What we need now is actually the amendment of the NOSDRA Act, that will overcome some of our challenges.”
He added: “Some of us are already on the way out, but we believed that for sustainability, we should be like other countries like Brazil, USA, Norway, where there are good standard practices that will protect the environment.
“The amendment is primarily to bring in funding for the agency. We need to be at par with other countries of the world with best practices. We need equipment, we need to be able to access difficult terrains in the Niger Delta. We need helicopters to be able to fly to such areas.
“The Niger Delta which generates so much money for the country, also deserves an agency with the capacity to protect the lives, health and environment of the people.”