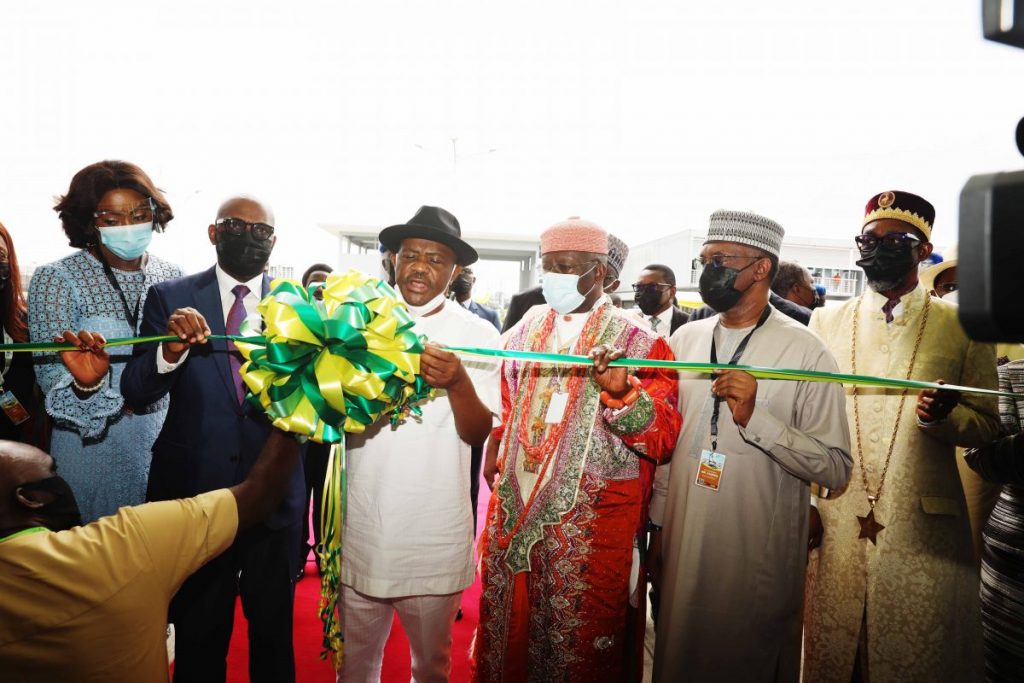 The new NLNG head office is a four-storey complex with cluster buildings occupying 76,000 square metres of land and equipped with 121 office spaces, 51 meeting and huddle rooms, one boardroom, smart and ergonomic workstations, a library, a press centre and a creche.

Other features of the office include a transit lounge for the company’s jetty, a warehouse, a fire station, a gym, two banking halls, an ATM gallery and an ample green area.

Commissioning the facility, the Rivers State Governor, Nyesom Wike, commended the NLNG management for taking a bold step towards strengthening its relationship with the people of Rivers State.

Governor Wike who had in 2015 performed the ground-breaking for the construction of the building, stated that NLNG’s presence in Port Harcourt spoke volumes of the Company’s respect for Rivers State people.

He added that the decision by Company to construct its head office in the state showed that Rivers State was safe for business.

“I am here because NLNG has shown a lot of commitment and support for the host communities and the state. The company has done well and has set an example for other companies to emulate.

“I am happy with what the company has done for the host communities during the construction of the building. That is what is expected. It has a very good relationship with its hosts in Bonny and in other parts of the state and I believe it will continue to enjoy a hitch-free business in the state.”

Also, the Managing Director and Chief Executive Officer of NLNG, Engr. Tony Attah, said the building and commissioning of the corporate head office, was in line with its vision of being a global LNG company, helping to build a better Nigeria.

Attah stated further that the Corporate Head Office has made the Company more visible, adding that the office was an unequivocal statement that NLNG remains a committed partner to the people of Rivers State in the sustainable development of the state.

“Nigeria LNG’s resolve to relocate its corporate headoffice from Lagos where it was established from inception of its operation was a well thought out decision that, among other things, demonstrates our strong bond of friendship with Port Harcourt and Rivers State even as we reinforce our commitment to stand tall as a Nigerian brand in the global marketplace.

“By this action, we also attest that Rivers State is not just the ‘Treasure Base of the Nation’ but the home of uncommon hospitality which we have come to enjoy and reciprocate at every opportunity.

“Beyond building a head office for our business, the beautification of this once remote locality was also in our hearts when we started this project. Earlier in August 2018, we had opened a part of this complex – an ultra-modern Transit Lounge – to enable a smooth and comfortable sail between our operating base on Bonny Island and the state capital.

“The construction of the facility was actually our first major step at transforming the shoreline, and since then we have intensified our usual efforts at making the creek a viable waterway for meaningful human activities. Today, we can pride ourselves, even if modestly, as a beacon of modernity in this axis of Port Harcourt. But equally important, we hope that our presence will trigger positive developments in real estate and ancillary businesses in the area.

“The commissioning of this complex is coming at such an auspicious time in the life of Nigeria LNG, a time when we have astutely proven our self as an excellent and reliable player in the global LNG market with 20 years record and still counting. Our doggedness towards achieving even more success in both the international market and the domestic energy sector has prompted the commencement of our Train 7 project which has been avidly socialized among all critical stakeholders.”

Attah further said that one of the signs of the company’s commitment to the people of Rivers State in the sustainable development of the state is the N120bn Bonny-Bodo Road, which NLNG is partly funding.

He added that some progress has been achieved in one of the most significant CSR initiatives by any single entity in the country and that the 40-kilometre road would boost economic activities and ultimately better the lives of the thousands of Nigerians in Rivers State.