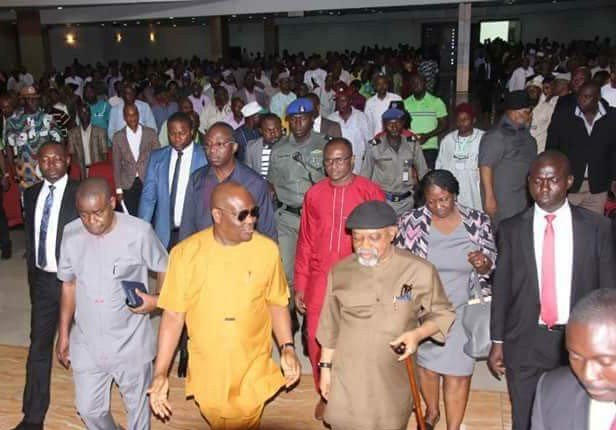 *Governor Wike and Minister of Labour and Productivity, Dr Chris Ngige at the South-South public hearing on the new national minimum wage.

28 April 2018, Sweetcrude, Port Harcourt — The Rivers State Governor, Nyesom Ezenwo Wike has said that Nigerian workers will be better off when states are allowed to fix their separate minimum wages in line with their financial capacity to pay.

Wike explained that majority of the states are on the fringes of financial viability and cannot meet their salary obligations to the civil servant without bailouts from the Federal Government.

He added that enhanced wages can only be possible when the Federal Government improves the economy of the Federation.

According to him, “And for us, therefore, the single national minimum wage system is yet, another lie that betrays the distortions in our federation and the structured dislocation of the States in the power equation between the Federal Government and the federating States.

“It is our view that the country and its workers would be better off if States are allowed to fix and pay their own minimum wages indexed to the prevailing cost of living and ability to pay.

“When this happens, it is possible that some States may go beyond the minimum threshold to pay a living wage, which is what our workers truly need”.

Governor Wike said that the previous review exercise failed to give maximum weight to the existing disparity in economic potential and capabilities among the 36 States of the federation, adding that it has been difficult for most of the States to implement the existing N18, 000.00 minimum wage.

“Here in Rivers State, we value our workers; we invest in their welfare in different ways, and we want them to earn living wages that can keep them and their families as comfortable as possible.

“The Rivers State Government, therefore, supports the ongoing consultations by the Tripartite Committee on National Minimum Wage for arriving at a new national minimum wage floor for the country.”

Earlier, the Minister of Labour and Productivity, Dr Chris Ngige, said the exercise has been held across the six geopolitical zones to ascertain the needs of Nigerian workers and employers to reach an acceptable and implementable wage.

Ngige who is also the chairman of the tripartite committee on National Minimum Wage said the aim is to ensure that the nation adopts a national minimum wage that will assure the attainment of social protection floor for Nigerian citizens.

He said: “It is hoped that at the end of the exercise, we will be able to have women and men who will be engaged in productive work in equable conditions of freedom to associate and bargain collectively with equality and human dignity”.