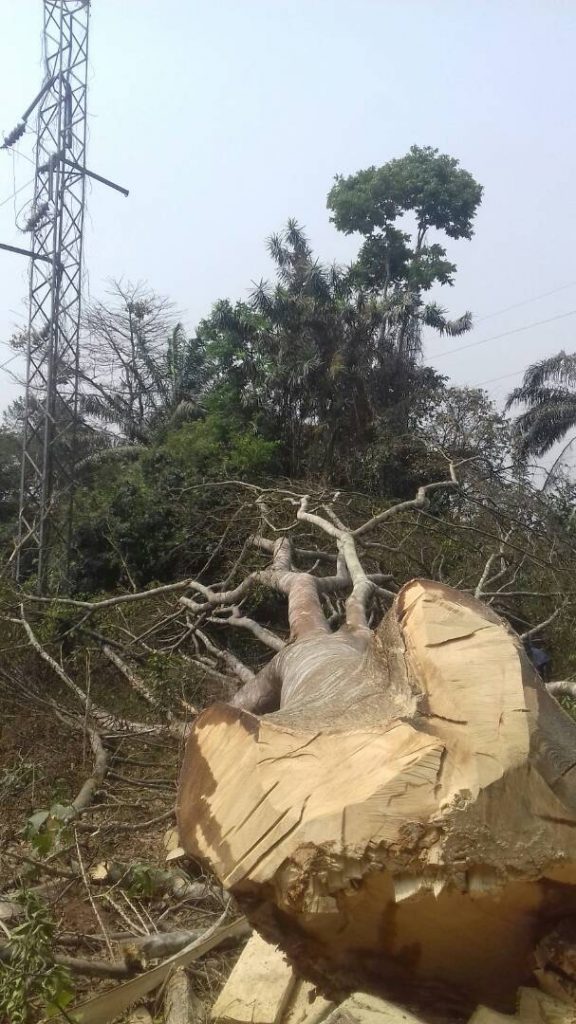 *A felled Iroko tree next to one of the damaged transmission line between Oji River and Nsukka town in Enugu State.

This has resulted in cutting off electricity supply to the 2x 7.5MVA 66/11KV transmission Substation in Nsukka, which supplies electricity to Nsukka town in Enugu State.

In a statement signed by the General Manager (Public Affairs) Mrs. Ndidi Mbah, TCN said that when several attempts to transmit electricity through its 66kV transmission line failed, it dispatched its lines patrol team who discovered that loggers fell an Iroko tree which damaged three spans of conductors and cross arms of towers 60 to 64.

TCN’s technical crew have already visited the site and assessed the extent of damage to the line and towers and materials are already being sourced from the company’s stores to repair the damage and restore service.

Replacement work is, however, expected to be completed within four days.

According to the statement, the incident has been reported to security agencies who are currently conducting investigations with the view to apprehending the culprits.

While apologizing for the attendant discomfort to electricity consumers in Nsukka Town, TCN assured that it would do everything possible to ensure that the transmission line is quickly restored to service and appealed to those who have information about the loggers to report to nearest security agency or TCN office.