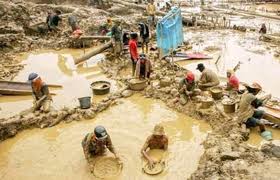 16 April 2013, Sweetcrude, Abuja – The World Bank has declared as satisfactory the implementation of about $120 million Sustainable Management of Mineral Resources Project for the revitalization of Nigeria’s minerals and metal sector.

The Bank with all it’s meticulous vetting and assessment of its programmes and projects in developing countries unabashedly praised Nigeria’s shot at a mining renaissance three decades after the demise of the sector. But, the commendation was largely anchored on what the bank regards as the prudent and judicious use of a $120 million grant it had extended to Nigeria as an incentive to resuscitating Nigeria’s solid minerals sector.

The grant, known as the Sustainable Management of Mineral Resource Project (SMMRP), is a home-grown intervention which was conceptualized after a National mining Policy dialogue in 2004. It became effective in April 2005 and was implemented through a seven-year period with an original closing date of June 2010. But the World bank granted an extension as compensation for some implementation delays which occurred earlier in the life of the project.

The $120m credit which has a 30-year repayment term with a 0.75 percent commission was taken as part of government’s emphasis on developing the non-oil sector to diversify the economy. It also conforms to the World Bank Group 2004 Joint Interim Strategy for Nigeria which was aimed at improving economic governance, creation of conditions for rapid private sector-led poverty reducing growth and enablement of local communities to take charge of their own development.

However, according to the agreement, the Federal government is expected to put in $7 million as counterpart funding, which sadly, till date, it has not.

In a document entitled: “Implementation, Completion and Results Report”, the global bank noted that in all the 15 financial and procurement audits conducted between the inception of the project in 2005 and its conclusion in May 2012, the SMMRP was satisfactory in all except the audit conducted in March 2007, in which it was rated moderately satisfactory.

It further revealed that in the financial management of the credit, all audits were unqualified and cases of fraud were uncovered, adding that during implementation of the procurement, two-thirds of project’s procurement performance ratings were mostly satisfactory.

The report commended the Federal Government for taking over the funding responsibility of SMMRP-supported projects such as the Mining Cadastre Office and the Nigerian Institute of Mining and Geosciences, NIMG, Jos.

The Project which was flagged off in April 2005 had two main objectives, namely to increase government’s long-term institutional and technical capacity to manage Nigeria’s mineral resources in a sustainable way, and to establish a basis for poverty reduction and rural economic renewal in selected areas of the country through the development of income generating opportunities through small-scale and artisanal mining and diversifying away from oil sources of income.

According to the report, the project achieved improved governance and transparency outcomes in the well-performing state-of-the-art cadastre system, efficient management of mining licenses, strengthened institutional and technical capacity, legal and regulatory framework as well as private sector-led development, increased mining activities and increased annual royalty collection value among others.

The bank observed that the SMMRP has strengthened the capacity of key government institutions to better manage the sector. It has also improved governance and transparency which is largely responsible for the commendable inflow of foreign investments into the sector.

On governance and transparency, the report noted that the SMMRP had funded the establishment of a “well performing and world class Mining Cadastre Office. it is remarkable that Nigeria has one of the best Cadastre systems in Africa,” it stated, adding that at the closure of the Project, over 10,056 mining licenses had been issued. “This is more than twice the projections that was envisaged at the inception of the SMMRP,” it added.

The report further noted that the project has made very significant progress towards achieving its development objectives. This includes the completion of the airborne geophysical work and geo-chemical mapping studies of the country. It added that prior to the SMMRP, “the newly restructured Ministry of Mines and Steel Development (MMSD), which was housed in dilapidated physical premises and lacked adequately skilled staff.”

Indeed, the rejuvenation of mining into a tangible economic activity in Nigeria largely lies in the hands of small scale and artisinal miners, whose total number, according to a recent survey, may well be practised by two million Nigerians. But, their activities are haphazard, uncoordinated and destructive to the environment with no reclamation and add almost zero value to the central economy, as there has been no way of regulating them. The SMMRP looks at this challenge as one of its key area of focus.

In this regard, the report commended the Project Management Unit of the Ministry of Mines and Steel development for their exemplary efforts in supervising the implementation of small grants programmes in accordance with the recommendations of the World Bank safeguards audit, which has safety measures for workers as well as proper documentations for the $10 million grant given by the Project for the formalization of Artisanal and small scale miners (ASMs).

So far, not less than 400 mining co-operatives have been formed, all aimed at securing the $10 million grants. A workshop was organised for them in Jos last June so they could be taught how to draw from the grant.

It is believed that, when this category of miners get to work, according to the new mining regulation, blue chips mining firms would easily be wooed to bring in the big capital.

The Director of the Sustainable Management of Mineral Resources Project office, Mr Linus Adie, who was at the meeting, told the gathering that “this is the largest World Bank mining project, not only in Africa, but in the whole world. It came immediately after the Extractive Industry Review of the country.”

According to him, the 0.75 percent credit tied to the grant spread over 30 years repayment period, means it would be of very little burden to repay.

Industry watchers believe that Nigeria is making steady progress towards revamping the mining sector. All that is needed is a transparent running and regulation of the sector and the development of basic infrastructure that encourage big time miners to come in.