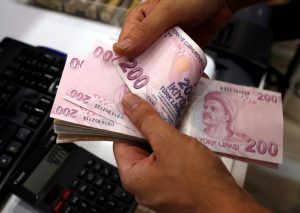 The MSCI world equity index,, which tracks shares in 47 countries, was down 0.7 percent and 1.7 percent since Friday’s open as the Turkish lira plunged to a record low, forcing the country’s finance minister to announce an economic action plan to ease nerves.

The lira has tumbled on worries over President Tayyip Erdogan’s increasing control over the economy and deteriorating relations with the United States. It fell as much as 12 percent at one stage on Monday, then recovered to a loss of 8.5 percent.

“The plunge in the lira, which began in May, now looks certain to push the Turkish economy into recession, and it may well trigger a banking crisis,” said Andrew Kenningham, chief global economist at Capital Economics. “This would be another blow for EMs as an asset class.”

In the United States, new record highs for Apple Inc and Amazon.com Inc were not enough to outweigh declines in financial companies that are the most likely to be affected by the steep decline in the lira.

“The global financial system is so interconnected that we tend to think of them as a group and financials come under pressure,” said Art Hogan, chief market strategist at B. Riley FBR in New York.

European stocks fell on Monday, with a pan-European index of shares down 0.3 percent and the banking stock index as much as 2.6 percent lower.