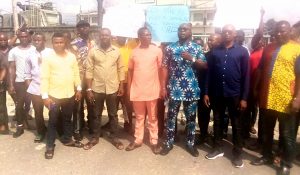 Port Harcourt — Youths from Okoloma-Afam, host community to Afam Power Plc, on Tuesday barricaded the three entrances to the power plant, demanding for a global memorandum of understanding, GMoU, between the community, Transcorp Consortium and the Federal Government.
Recall that Transcorp Consortium had last month announced a hundred percent acquisition of the 966MW Afam Power Plc and Afam 3 Fast Power Limited, at an acquisition cost of N105.3 billion.
The youths, numbering over 100, with placards bearing different inscriptions, including, ‘No road, no Transcorp; ‘FG call Transcorp to order’; barricaded all the gates leading to the power plant with fresh palm fronds and heaps of sand.
The youths are demanding for equity shares in the ownership of the power plant as well as the establishment of a cottage hospital in the community, employment of 40 graduates from the community, provision of free power supply to the community and the dualisation of the road leading to the power station, the Oyigbo-Afam road.
Leader of the protest and Chairman, Oyigbo Local Government Area People’s Assembly, Comrade Ejike Dike, said the community was not against Transcorp buying the asset, but that there must be a dialogue with the host community.

Dike explained that the community already had a laid down agreement with Afam Power Plc, which include provision of free power supply to the community, and would not want a situation where the new operator, Transcorp, would jettison such agreement. 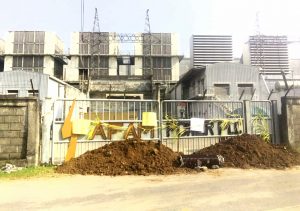 He explained that since the asset was sold in November, a letter has been sent to Vice President Yemi Osinbajo, who presided over the sale of the power plant, as well as the Senate President, House of Representatives’ speaker, Transcorp and the Bureau of Public Enterprises, but that up till now, there had been no response from them.

“We are saying enough is enough. We had an agreement with the Federal Ministry of Power that they will mobilise to site on January 14th 2019, for the building of a cottage hospital and dualisation of our main road and employment of 40 graduates from our community, but till today, nothing has been done.
“We are not against Transcorp buying up Afam Power, but the Federal Government must ensure Transcorp takes up both the assets and liability,” he said.
Also speaking, the Public Relations Officer of Oyigbo Local Government Area People’s Assembly, Comrade Light Nwankwo, said the power plant does not exist in the air, but in a community owned by people, therefore there must be a dialogue with the people.
Nwankwo regretted that they (host community) were only made to hear the news on the sale of the power plant on television, as there was no prior notice or consideration of  the community.
“We are saying that before Transcorp takes over this asset, there must be a GMoU between us, the host community, Transcorp and the Federal Government. We are ready to dialogue with Transcorp,” he said.
The group’s Director of Socials, Comrade Didanda Sylvanus, explained that the protest was not sponsored, adding that the youths would continue to barricade the facility until their demands were met.