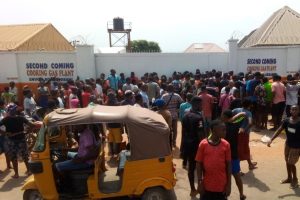 *Some Enugu residents outside the LPG plant premises

Lagos — Second Coming Nigeria Limited, a major Liquefied Petroleum Gas, LPG company, in conjunction with Enugu State Government has donated 35,000 litres of LPG (cooking gas) worth ₦12 million to residents of Enugu state as part of its Corporate Social Responsibility, CSR to ameliorate the suffering of the citizens.

The Managing Director of the company, Dr. Basil Ogbuanu, who made the donation said the 35,000 liters (20,000 kg) LPG donation was part of the company’s support to government’s effort at ameliorating the suffering of the people who cannot afford the commodity in their kitchen this yuletide.

According to Ogbuanu, ” ln the spirit of the Yuletide and as part of our Corporate Social Responsibility (CSR), also, in support of His Excellency’s sterling leadership and good work to the people of Enugu State each of our four plants in the state will give out 12.5 kg of gas to 400 people in four locations of the State. This is in conjunction with the Enugu State Government to support the people of Enugu State during this festive season”.

Ogbuanu said that the product will be distributed freely to residents so that people will have gas to cook their food as they celebrate the birth of Jesus Christ.

He commended the State Government for its focus and commitment in ensuring that businesses enjoy a friendly environment to thrive.

Dr. Ogbuanu who holds a Phd in Entrepreneurship thanked all the loyal customers of Second Coming gas plants for believing in the company’s tradition of honesty and transparency over the years.

He, therefore, called on the people to take advantage of the multiple award-winning brand to make their cooking experience easier.

The products were dispensed to residents in Agbani town and Amaechi road plants on December 27, 2021, while Abakpa Nike and Oji River plants will take their turns on 30th December 2021.

He further appealed to LPG dealers to support government towards ameliorating the suffering of the people at this period of sharing and giving.

Ogbuanu, however commended the federal and state governments for the frantic efforts towards eradicating the use of firewood for cooking and called at governments at other levels to key into the drive.

Meanwhile various residents who benefited from the free gas expressed happiness over the company’s act benevolence to alleviate their plight by providing free cooking gas to them.

A customer, Mr. Charles Ezeoha said he was excited, adding that this was the first time he has seeing such magnanimity.

“I am surprised that company invited people even on radio to come and take free gas. I was here 4 am because of it and I am happy that 12.5kg cylinder was refilled free of charge.

“I am impressed as everything is moving smoothly because of the way it was organised, adding that crowd is under control,” he said.

A 70 -year-old customer, Mrs. Ifeyinwa Nnaji said she was overwhelmed by the kindness of the company and prayed for its continuous existence.

She prayed God to keep the owner of the company and its survival.

Over 3,500 people converged at each of the free gas station’s premises struggling to have their gas cylinder refilled.

Jasil Chizuruoke Emeribe, a student said: “I got the call from my mother that Second Coming was trying to give back to their customers, so I rushed out. I came here by 7 am. I wrote my name and they gave us numbers and we came in.

“The last time I bought 12.5 kg was last Thursday, I bought N8200. But today I am getting it free of charge and I say to Second Coming that they are the best. Their services have been wonderful.

“Doing this is wonderful looking at the price of gas in the market. God bless them. I wish they would continue this way. This is the first time they are doing this here; before now they shared a calendar and what have you. I have been patronising them before now and I love their services. Before now they have been removing N200 from every purchase made if you have their membership card, ” he said

For Emmanuel Aguekwe, “I have come for the free gas. We were called to come and receive it. I was given 12kg because that is the Cylinder I came with. You know the price of gas is on the high side and for this, I am grateful. I give God the glory. I never knew there are people who could still do this type of thing considering the situation of the country. I pray God to continue to bless this company”.

Agunambu Toochukwu, a resident, said that “I heard the news that Second Coming is given free cooking gas. I have never seen this kind of a thing before, and I am happy that I participated in it. I was given 12.5kg free of charge. I am thanking the Managing Director of the organization. I am also thanking the government of Enugu state. This is awesome”, he said.

Miss Ngozika Ogbu, said “I did not pay. I was given 3kg. I am happy about this because the cost of cooking gas is high. The 3kg is 2100 and I thank the management of Second Coming and I wish they could do another one for the New Year.

“I came with a 3kg cylinder because that is what I have. They give out 12.5kg but this is what I have. It is enough for me. At least in the next three weeks, I will not buy again” she said.